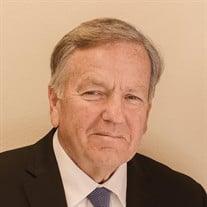 Hugh James Baker died in his home surrounded by his family on Sunday, June 5, 2022. Hugh was born on May 21, 1948 in Ontario, Oregon to Thurn J. and Ardath Hoggan Baker. He grew up in Moses Lake, Washington on his father’s farm. After high school Hugh spent one year at college before serving a full-time mission for the Church of Jesus Christ of Latter-day Saints in Sweden for two and a half years. After his mission, while attending an animal science class at Brigham Young University, he sat behind the only girl in the class and introduced himself. Not one to rush things, three years later Hugh married Lila Jean Chadwick. The professor who taught the class served as a marriage witness for them in the Salt Lake Temple on November 21, 1974. Upon graduation from BYU with a BS in Animal Science, Hugh returned to Moses Lake to farm with his dad and brothers. Eventually Hugh also became a soil consultant for Tech Ag and finally a teacher/advisor for JATP at Big Bend Community College. Working with the students and staff at the Japanese Agricultural program brought him great satisfaction and he wished he’d trained as a teacher back in his college days. Hugh and Lila raised six children in Moses Lake and taught them to work hard and dream big. He was a wonderful grandfather to twenty-five grandchildren who loved to tinker around the shop with him, honk his nose, and get great big bear hugs from him. Hugh spent his entire life with an unwavering faith in our Savior, Jesus Christ. This faith and love for Him inspired him to leave everyone he met a little happier and their load a little lighter. He served faithfully in his many callings in the Church of Jesus Christ of Latter-Day Saints and in the Columbia River LDS temple. As a young boy whose dad was a pioneer to the area in agriculture, he had dreamt of the day when Moses Lake would be more than fields and sagebrush and become a bustling town with enough people to support an LDS temple. He was so excited for the temple being built and undoubtedly would have continued to encourage everyone he knew to attend the open house when the time comes. Hugh is survived by his wife Lila and his children: Haven (Teresa Pinegar) Baker of Eagle, Idaho; Whitney (Bridget Stucky) Baker of Richmond, Texas; Ivin (Christina Richardson) Baker of Fall City, Washington; Golden (Feven Teklu) Baker of New York, New York; Cassidy (Bo) Beus of Moses Lake, Washington; and Liberty (David) Woodland of Issaquah, Washington; along with twenty-five beloved grandchildren. He is also survived by his brothers Reid (Lori Jewkes) Baker of Moses Lake; Leon (Lorraine Jones) Baker of Moses Lake, Garth (Katrina Hunter) Baker of Orem, Utah; and Elizabeth Fielding also of Orem, Utah. He was preceded in death by his parents and his sister Claire Hess who died the day before Hugh. Services are under the auspices of Kayser’s Chapel of Memories. A viewing will be held at the mortuary Friday June 10 from 6-8pm. Hugh’s funeral will be on Saturday, June 11 at 10:00 (following 9:00am viewing.) Burial at Guarding Angels Cemetery will follow,

Hugh James Baker died in his home surrounded by his family on Sunday, June 5, 2022. Hugh was born on May 21, 1948 in Ontario, Oregon to Thurn J. and Ardath Hoggan Baker. He grew up in Moses Lake, Washington on his father&#8217;s farm. After... View Obituary & Service Information

The family of Hugh James Baker created this Life Tributes page to make it easy to share your memories.

Hugh James Baker died in his home surrounded by his family on...