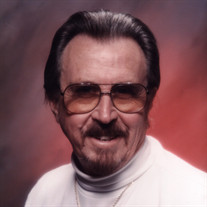 Hubert (Hugh) E. Spencer August 15, 1931 - February 15, 2019 Born in Hickory County, Missouri to Ernest and Margaret Spencer, Hugh Spencer, 87, passed away peacefully with his wife by his side at Summer Wood Alzheimer's Facility. Growing up in Missouri, trapping rabbits, hunting and fishing, Hugh developed a lifelong love for the outdoors. After high school he joined the Marines and served in the Korean War. He received an Air Medal Award while stationed at the Marine Helicopter Transport Squadron 161, as well as many other medals. After his discharge he joined the Ventura Police Department in California. While in Ventura, his daughter Shelley was born. He eventually moved to Washington where he joined the Kent Police Department, later serving as a Chief of Detectives. When he left on disability in the 70's, he worked for Kittitas County Prosecutors. Later, after moving back to Missouri. the Governor of Missouri appointed Hugh the position of Municipal Judge, and he served from May 1981 to March 1985. Afterwards, he ended up in Michigan and bought a Dawn Donut franchise in Flint. Hugh met Marian in 1991 through mutual friends and they were married on November 13, 1992. They worked four years together in the donut business while maintaining their home in Moses Lake. During that time, they traveled through the contiguous 48 states and four provinces of Canada in their fifth wheel. He and Marian enjoyed shooting skeet and fishing in Yellowstone. After returning to Moses Lake, they went to Cle Elum/Roslyn in 1997, where Hugh was in charge of security, (Roslyn Security), on the property that eventually became Suncadia Resort. Hugh was a jack-of-all trades. He could build anything. His daughter has fond memories of watching him work on many projects including a fiberglass boat he painstakingly built when she was a child. He is survived by his wife of 26 years, Marian, his daughter Shelley Spencer and daughter-in-law Ann Riley, (Ellensburg); step daughters Tara Ashley (Spokane) and Gemille Wise and son-in-law Jon (Seattle); daughter-in-law Mauri Ashley (Boise,ID); and grandchildren Cody and Brock Ashley (Boise, ID), Michael and Benjamin Wise (Seattle), Sean and Alayna Spencer-Riley (Ellensburg). He was preceded in death by parents Ernest and Margaret Spencer and stepson Merritt Ashley. Special thanks to the staff of Summer Wood for the wonderful care you provided to Hugh. In lieu of flowers, the family suggests memorial donations to the Law Enforcement Memorial, 415 12th Avenue SW, Olympia, WA 98501 A celebration of life will be on Saturday, May 11th at 11:00 am at the United Methodist Church, 746 S. Ironwood DR., Moses Lake, followed by a reception lunch.

The family of Hubert E Spencer created this Life Tributes page to make it easy to share your memories.