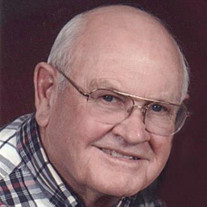 Howard Eugene Rohlinger, age 88, passed away peacefully at Hospice House, Spokane, surrounded by his family July 14, 2018. He was born April 7, 1930 in Spokane, Washington to Frank and Alice Rohlinger of Moses Lake, WA. Shortly after graduating from Moses Lake High School, Howard joined the Washington Air National Guard and served for a time in England during the Korean War. He met the love of his life, and in 1958, married Eunice (Shoop). They celebrated their 60th wedding anniversary June 28. He worked many years with USPS in Moses Lake before moving to Warden where he was employed as the Rural Letter Carrier. He was a member of Moses Lake Assembly of God, Warden Assembly of God, then in his later years, after moving back to Moses Lake, New Beginnings Assembly of God became their church home. Howard enjoyed getting together with family and friends, camping and anything with an engine —cars, motorcycles, planes, trains and boats. Many hours were spent at car shows, air shows or just parking at the airport watching the planes take off and land. He is survived by his wife, Eunice, of Cheney, WA; son Mitch (Michele) Rohlinger of Cheney, WA; daughter Holly (Tony) Pixton of Umatilla, OR; sister Norma Lea (Magellan) Brunson of Summerville, SC; sister-in-law, Viola (Calvin) Rohlinger of Moses Lake, WA; grandchildren David Pixton, Mark Pixton, Allison Nichols; great grandson Wade Nichols; many nephews and nieces. He was preceded in death by his parents Frank and Alice Rohlinger; brothers Francis and Calvin Rohlinger; sisters Elva Ruth Rohlinger, Ruth (Wesley) Nelson, Betty Jean (Forrest) Colee; son Grant Rohlinger. Howard lived his life as a testament of what he believed, and he was an example of a true follower of Christ. In lieu of flowers, the family suggests donating to Hospice of Spokane, P.O. Box 2215, Spokane, WA 99210. A graveside service will be held at 10:00 a.m. on Friday, July 20, 2018 at Ephrata City Cemetery, 333 E St NW, Ephrata followed by a memorial service at 11:30 a.m. on Friday, July 20, 2018 at New Beginnings Christian Center, 318 W. Northshore Drive, Moses Lake.

The family of Howard Rohlinger created this Life Tributes page to make it easy to share your memories.