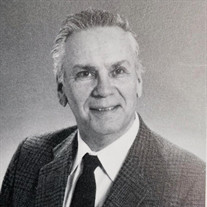 Henry Lewis Davis 3/3/1931 – 8/26/2021 Henry (Hank) Davis passed peacefully in his sleep in his room at Summerwood Alzheimer’s Center, in Moses Lake on August 26th. He was 90 years old. Hank will be remembered for his charming wit, inclusive character and unflappable cantankerousness that marked his later years and endeared him to those who knew and cared for him. He grew up in Wellborn, Texas, which is just outside of College Station, in a family of four boys and one girl, who knew him as “Ponk” - a nickname that reflected his unique blend of rugged individualism, staunch determinism, and brazen feistiness. He was a solitary person who made friends wherever he went. He was a star football player on the Texas A&M Consolidated High School team, and he played baseball as well, which later in life prepared him for coaching his sons’ sports teams, and for being a very fine umpire, which attracted the attention of professional leagues looking for officiating talent. Hank had a brief military career in the Air Force, serving during the Korean Conflict, and he finished his college education in his hometown, at Texas A&M University, where he became an electrical engineer. Hank spent more than 40 years in the defense and space industry, eventually advancing to the highest levels in engineering at the Boeing Company, in Seattle, Washington. Hank designed hardware systems for missiles, so he was an actual rocket scientist. During the process, he managed to raise a fine family of four boys and was married to his wife Dixie for over 60 years. Hank and Dixie had three grandchildren that they adored along with wonderful daughters-in-law they deeply loved. Hank enjoyed fishing, hunting, camping, gardening, and rock hunting. He made beautiful jewelry and walking sticks in his retirement and enjoyed researching his genealogy and traveling overseas. It was a good run and he finished strong. He was a tough, funny and reflective man, who will be missed by his family and friends. Hank will be interred with his wife at the Tahoma National Cemetery, in Auburn, Washington.

The family of Henry Lewis Davis created this Life Tributes page to make it easy to share your memories.