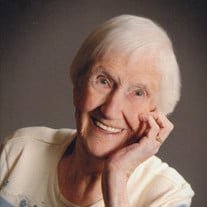 Henrietta (Hennie) Denton German died at Samaritan Hospital in Moses Lake on her 96th birthday in the early morning of Monday, August 19, 2019. Her three daughters, a granddaughter, and a son-in-law surrounded her as she left for a new heavenly life. Hennie was born in Canarsie, a neighborhood in Brooklyn, New York, on August 19, 1923, to William and Marie Denton. She was one of five children. When Hennie was 16 years old, her parents lost their family home as a result of the Great Depression; and the family moved to Woodhaven on Long Island, New York. As a young woman, Hennie attended Girls Commercial High School in Brooklyn, where she graduated in 1940. Following graduation, she worked for Reader’s Digest in New York City, starting pay: $15 a week! In 1943, Hennie met her future husband, Harold German, at a neighborhood party sponsored for U.S. servicemen who were awaiting transfer to the war in Europe. It was love at first sight for Harold and Hennie. The newly smitten couple corresponded for nearly three years, throughout the remainder of World War II. Upon his return stateside, Harold proposed to Hennie; and they were married February 2, 1946 at St. Thomas the Apostle Catholic Church in Woodhaven, New York. Following their marriage, they moved to Bremerton, Washington, where Harold began a job at the U.S. Naval Shipyard. Hennie and Harold lived in Bremerton for the next 45 years, raising three daughters along the way, Beverly, Linda, and Lorna. An accomplished seamstress, Hennie sewed many of her children’s clothes throughout their elementary school years. When they reached high school, her daughters’ prom dresses and evening gowns were all carefully stitched and embellished. Other needlework included crochet, cross stitch, and crewel embroidery. She was especially proud of an extraordinary tablecloth, crocheted in a very fine and detailed pattern, which won her a blue ribbon at the annual Puyallup State Fair. In addition to needlework, Hennie was an accomplished Scrabble player, who taught her children and grandchildren many of the game’s strategies. For many years, she was impossible to beat. Eventually, her granddaughter, Keely, was winning all of the games and used this experience to craft the essay she submitted with her college applications. A favorite pastime for Hennie was occasional trips to Reno with Harold, where she consistently favored the once popular penny slot machines. She continued to love the slots into her early 90’s and loved an early morning drive from Seattle to the Tulalip casino. Yes, she was driving a car into her 90’s! Hennie attended Our Lady Star of the Sea Catholic Church while living in Bremerton. After moving to Seattle in 1991, she joined the parish of St. Bridget Catholic Church in Laurelhurst where she was an active volunteer for many years and a member of the church’s Holy Family Guild. She was especially close to Father Harold Quigg, her favorite priest during her lifetime. Hennie’s beloved husband, Harold, preceded her in death on October 22, 1996. They had been married for 50 years. Following her husband’s death, Hennie remained in their small condo in Laurelhurst, later moving to a larger home in Windermere. In 2018, she became a resident of Merrill Gardens, a retirement community near University Village. She made many wonderful friends during her residency there, most especially with Hal Ellner, Sally Swank, and Ken Thomas. Bingo games and trivia contests were enjoyed immensely. She lived at Merrill Gardens until May 2019, when declining health required more care; and she then moved into the home of her daughter, Linda. She was later admitted to Evergreen Hospice in Kirkland where she was cared for so well that her health rallied and she was discharged. At this point, her daughter, Bev, arranged for her to stay in Moses Lake where she remained until her death. Hennie was predeceased by a cherished granddaughter, Katie-Marie Moore, of Moses Lake. She is survived by her three loving daughters, Beverly Moore and husband, Ray, of Moses Lake; Linda Wold and former son-in-law, Kevin Wold, of Seattle; and Lorna Walter and husband, Norland, of Seattle. She was the beloved grandmother of Melanie Cochrun (John) of Granite Falls; Dean Moore (Maura) of Moses Lake; Stephen Walter (Jacqueline) of Denver, Colorado; and Henry Wold and Keely Wold, both of Seattle. She had five great grandchildren, Anjelica, Penny, and Elisabeth Cochrun of Granite Falls; and Kennedy and Avery Moore of Moses Lake. She is also survived by numerous nieces and nephews and their descendants. The family wishes to thank the cardiology team at Swedish Heart & Vascular – Cherry Hill, particularly Dr. Peter Demopulos; Evergreen Hospice in Kirkland, and Samaritan Hospital in Moses Lake, for the loving care provided during the last years and days of our mom’s life. She is an irreplaceable presence in our family, and memories of her will be cherished forever. A private family service is planned to celebrate and honor her life. Memorials are suggested to charities of choice. Please express your thoughts and memories for the family at www.kayserschapel.com. Arrangements are under the care of Kayser’s Chapel of Memories.

Henrietta (Hennie) Denton German died at Samaritan Hospital in Moses Lake on her 96th birthday in the early morning of Monday, August 19, 2019. Her three daughters, a granddaughter, and a son-in-law surrounded her as she left for a new heavenly... View Obituary & Service Information

The family of Henrietta W German created this Life Tributes page to make it easy to share your memories.