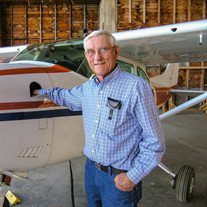 Helmut Henry Hintz, 84, of Ephrata, Washington quietly and strongly finished the race on February 24, 2018 while listening to Bible verses. He is survived by his beloved wife, Myrtle, and his cherished children Vonda (Randy) Mulrony of Pomery, WA, Phillip (Shannon) Hintz of Moses Lake, WA, Darwin (Gena) Hintz of Adrian, WA, Gilbert (Kirsten) Hintz of Ephrata, WA, Sharlyn (Hide) Maeda of San Jose, CA; stepchildren Angie (Jon) Webber of Colfax, WA, Scott (Brooke) Isaak of Chelan, WA, Cindy (David) Fujiwara of Kaneohe Bay, HI, Steven (Janna) Isaak of Mobile, AL; sisters-in-law Sandy Hintz, Shirley Hintz Rhodes, and Patricia Hintz; 33 grandchildren, 22 great-grandchildren, and many nieces, nephews, and friends. He was preceded in death by his first wife Leona Hintz, brothers Hillmer Hintz, Rudolf Hintz, Gilbert Hintz, and Donald Hintz, and sisters Viola Ditty, and Alma Franz. Helmut will be remembered for his unwavering faith in God, humility, and courage, and his genuine interest in the people and world around him. His faith was demonstrated more by his endless acts of kindness than by his words and he did not know a stranger. Most of all, he will be remembered for his great love and support of his family and extended family. Helmut was born on June 27, 1933 in Zap, North Dakota, population 406. His parents were Henry and Emma Hintz, whose families had settled in the North Dakota area after immigrating to the U.S. from Russia. His parents called him “Helmut”, a name that is not only a reflection of his strong German heritage, but also of the person he would become. In German, Helmut means “courageous.” Helmut’s family moved to Nyssa, OR when he was 3 years old to pursue farming opportunities. He enjoyed country life and learning everything from playing the saxophone to caring for all kinds of animals, especially horses. Helmut developed his lifelong “never quit” work ethic from a young age when he necessarily took on a leadership role in the family farm operation. As a teenager, he carried the responsibilities of a breadwinning adult, but was able to make time to enjoy his school’s FFA program, and graduated from Nyssa High School in 1951. After graduation, Helmut moved to Eastern Washington with his family, who were attracted by the Columbia Basin Project. Helmut and his brothers were pioneers in the Basin, pouring themselves into breaking out the sagebrush and working round-the-clock to harvest their first crop of beans. He married the loving mother of his children, Leona Williams, in Red Bluff, CA, who blessed him with a girl and three boys in five years, followed by another girl in 1969. Their first humble home was established on Unit 81, Block 89 south of Ephrata. In the 70’s, Helmut added on to his home and land, continuously innovating and perfecting farming techniques to grow multiple crops on 1,000 acres. He especially enjoyed growing sugar beets, and developed his business to become a primary producer in the county. Helmut was committed to his faith community and served on the Bethlehem Chapel Assembly of God board and building committees. He was a fully vested member, who like in other areas of his life, meticulously planned for the purchase of the right land for a new church building, and saw it through to completion. Helmut was a devoted husband to Leona until her passing in 1986. He was later blessed with a new love in Myrtle Isaak, whom he married in 1990. With their union, his family extended to include two more sons and two more daughters, along with his many cherished grandchildren and great-grandchildren to follow. Helmut was an enthusiastic traveler and documentary photographer. He enjoyed trips visiting family, sometimes flying his Cessna to get there, and exploring landmarks around the U.S., as well as in Japan and Hong Kong. He took painstaking care and time to capture a picture. While at the Grand Canyon, he unknowingly, but confidently instructed a professional National Geographic photographer on how to get the perfect shot. Helmut persevered through the physical health challenges of his last years with characteristic faith, strength, and courage. Through it all, his favorite phrase was “Happy Day.” He cared about, befriended and mentored people, steadfastly modeling the right thing to do, in the right way, and for the right reason. He will be deeply missed, but his legacy will live on through the lives of those he touched. Viewing will be held from 3-7 pm on Thursday, March 1, 2018 at Kayser's Chapel of Memories. Interment will be at 10:30 am on Friday, March 2 at Pioneer Memorial Gardens in Moses Lake followed by a memorial service at 1:00 pm on Friday, March 2, 2018 at Bethlehem Chapel Assembly of God in Ephrata, WA. A dinner will follow the memorial service at the church. Memorial contributions may be made in Helmut’s name to the Bethlehem Chapel Assembly of God “Sanctuary Fund.”

Helmut Henry Hintz, 84, of Ephrata, Washington quietly and strongly finished the race on February 24, 2018 while listening to Bible verses. He is survived by his beloved wife, Myrtle, and his cherished children Vonda (Randy) Mulrony of Pomery,... View Obituary & Service Information

The family of Helmut H Hintz created this Life Tributes page to make it easy to share your memories.