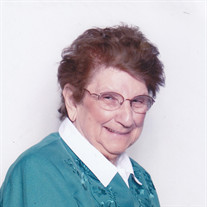 Helen Marie Kinkel (Byland) 94 passed away April 8, 2019 in Moses Lake, Washington. She was born to Orville and Lucy Byland on March 9th, 1925 in Osakis, Mn. Where she grew up and lived until she graduated from high school in 1943. She moved to Washington right after she graduated. She had many loves in her life, who proceeded her in death. Our mother was a social butterfly, with a great sense of humor who loved all her numerous friends she had. She loved spending time at the senior center and her lunch bunch. She enjoyed dancing and would go to the senior dances just about every week. Her grandchildren remember when they were younger going with her to these dances, and having the best time. When they got to stay the night with her there was always a competitive night of games with popcorn(mostly Yahtzee and sorry). She was an avid seamstress, who also took pleasure in doing crafts of all kinds, she made dolls, doll lamps and stuff animals to just name a few. She loved to finish her crafts give them to her family and friends. She liked baking, she would make her famous cinnamon rolls with her grandchildren, fried bread with the leftover dough and lemon meringue pie. Halloween was one of her favorite holidays if you knew her you knew she would love to get dressed up and go to Halloween events. Our mother lit up a room with her smile and laughter, She always had a story to tell and we will all greatly miss her. She is survived by her children: Susie Vazquez(David). Shellie Morse. Sheila Mcclanahan(Gerald). Samuel Irwin Jr. Bonita Spencer. Larry Richards(Teresa). Clarke Richards(Jan). Grandchildren: Cynthia Vazquez-Hintz, Heather Vazquez-Spink and Matthew Vazquez. Michelle Longoria, James Morse, Michael Morse, Aubrie Niehenke and Amber DeAnda. Darrell Danner, Shannon Graves, Clarence Danner, and Amy Richards. Shon Irwin and Zackary Haase. Barbie Spencer, Billy Spencer and Danny Spencer. Robbie Richards, Rochelle Irwin, Lonny Richards, Kenny Richards and Jason. Erin Pipkin, Kellen Richards and Jonathan Richards. Randy Richards. And many great and great-great grandchildren. She was proceeded in death by: her parents Lucy and Orville Byland, Two sons Thomas Richards and Gary Irwin, Grandson Joseph Vazquez, a brother Wayne Byland, son in-law William Morse, Her husbands: John Richards, Samuel Irwin, Gene Reinert, and Clyde Kinkel. She lived a long fulfilling life and enjoyed every minute while she was on this earth. She will be loved and missed by us all. A memorial service will be held April 24, 2019 at the Moses Lake senior center at 4:00 pm. Refreshments and dessert will be served after the service.

Helen Marie Kinkel (Byland) 94 passed away April 8, 2019 in Moses Lake, Washington. She was born to Orville and Lucy Byland on March 9th, 1925 in Osakis, Mn. Where she grew up and lived until she graduated from high school in 1943. She moved... View Obituary & Service Information

The family of Helen Marie Kinkel created this Life Tributes page to make it easy to share your memories.