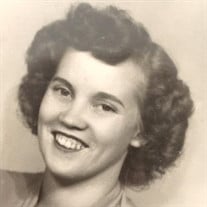 Helen Joy (Brownfield) Thaut, long-time resident of Moses Lake and Spokane, passed away peacefully at the age of 91, on February 7, 2017. The daughter of M. Foster and Della (Glover) Brownfield, Joy was born in Pullman, Washington in 1925, the youngest of six children. She was known by her middle name because, in her words and with a laugh, "Mother said if I was a good baby she would name me 'Joy.' Evidently I was a good baby." Joy grew up on a farm and attended school in Chambers and Johnson, Washington, and graduated from Pullman High School in 1943. She loved singing and dancing and enjoyed participating in singing groups and pep club. Joy valued her friendships from that time and stayed in touch with those friends through many decades. Joy moved to Spokane with her family in 1943. She worked as a receptionist to earn money for college, then returned to Pullman to attend Washington State College. She stayed for one semester, had a lot of fun, decided college wasn't for her, and returned to Spokane. She worked as a receptionist for farm equipment dealer Hofius-Ferris Equipment Co., and met her future husband Dan, who worked across the street at Arden Farms Dairy, when she was walking to catch the bus. Joy and Dan married in 1948 and lived and raised their two children in Spokane, Ritzville, and Opportunity, until Dan's job transferred them to Moses Lake in 1960. They initially claimed they would move back to Spokane in a few years, but soon grew to love the city and people of Moses Lake and could not imagine ever leaving. Joy was employed for many years in the bakeries at Jack's Bargain Barn and Sigman's IGA, and later worked for a number of local retail stores. Numerous times she tried to retire, but would get a call "Would you come help us out?" -- and, thus, the next job would begin. Joy enjoyed her co-workers and customers, and took pride in doing her job well. Through the years Joy proudly and tirelessly supported her children and grandchildren in their daily lives and with their various sports and activities, often traveling many miles to do so. Time spent with any of her many siblings, nieces, or nephews, and their spouses and children, was also special for her. Joy enjoyed having friends stop by the house to visit, and enjoyed gardening (especially her roses), sewing, decorating her home, reading, swimming, walking through the neighborhood --or almost anywhere (even completing a Bloomsday 12k), and traveling throughout the United States. Following Dan's death in 2006, Joy moved to Auburn, Washington. Living the last 12 years with Alzheimer's, Joy remained gracious and cheerful, still enjoying visitors and the people around her. She is survived by son Jerry (Debbie) of Anthem, AZ; daughter Sue Deal of Auburn; her adored grandchildren Jaime Green (Tyler), Kory Thaut (Nanette), Devin Thaut, Allison Deal, Travis Lee, and Chris Lee (Chelsea); seven great-grandchildren; sister-in-law Ethel Brownfield; and twelve nieces and nephews. She was preceded in death by her husband Daniel; sisters and brothers-in-law Dolores Harris (Cecil), Peggy Warnack (Ed), Melcena Harris (Bill), and Annada Westerman (Bill); brother G.R.(Jack) Brownfield; sister-in-law Theresa Brownfield; and six beloved nieces and nephews. The family is grateful to Cascade Complete Care adult family home in Renton, Washington, for the care and love they gave Joy and the family. An online memory book is posted on Kayser's Chapel of Memories website at www.kayserschapel.com A private service and burial will be held in Spokane.

Helen Joy (Brownfield) Thaut, long-time resident of Moses Lake and Spokane, passed away peacefully at the age of 91, on February 7, 2017. The daughter of M. Foster and Della (Glover) Brownfield, Joy was born in Pullman, Washington in 1925,... View Obituary & Service Information

The family of Helen "Joy" Thaut created this Life Tributes page to make it easy to share your memories.