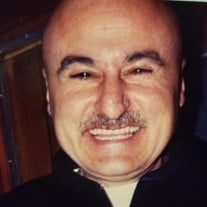 Hector G. Alaniz peacefully passed away in his sleep on 05/23/2020 at the age of 67. Hector was born on June 20,1952 in Mathis , Texas to Julio V. Alaniz and Angelica G Alaniz. Hector lived much of his earlier life in Guerro, Mexico, while his father applied for United States citizenship. While there he learned to fish with his father and many uncles off the Gulf of Mexico. These early memories were precious to him. Hector learned at very young age the value of work. When he was just 7 years old he polished shoes to make candy money. After moving back to the US the family settled in 1964 at Moses Lake Wash. Hector attended school in Moses Lake and succeeded there academically. One of the greatest memory happened when Hector turned out for his school’s track team. In 1969 Hector broke the schools record for hurdle jumping and held that record 27 years. In 1972 Hector married the love of his life Velma H, Alaniz. Hector continued to live in Moses Lake and supporting his young family. Hector and his wife then moved to Wenatchee, Wash where he worked for the state highway department. In 1973 their first son was born Hector Alaniz Jr. In 1978 Hector and his family returned to Moses and continued working for the Prudential insurance company. In 1979 their second son was born David H. Alaniz and their family was complete. As the years rolled by Hector was a loving husband and devoted father, grandfather and great grandfather to his extended family. One of the highlights of his life was gathering his family and numerous friends together for Barbecues. Hector often talked about returning to Guerro, Mexico to the place he grew up and had such good memories. Hector was proceeded in death by his father, Julio V. Alaniz and his mother Angelica G. Alaniz, One brother Julio G.Alaniz, and a sister Enedelia Rentera. Hector is survived by his wife of 48 years Velma Alaniz and 2 sons Hector Alaniz Jr (his wife Racheal Alaniz} and David H Alaniz and 3 grand children Vanessa M Alaniz, Adrian J Alaniz, and Alexis M Alaniz, and 2 great grand children, Elias Alaniz and his brother Enzo Alaniz. Hector is also survived by siblings, Enelina Mendez, Charles and Belinda Alaniz, Noel Alaniz, and numerous nieces, and nephews. Hector was a loving and positive person his entire life. Along with his family, Hector had many, many friends. He will be greatly missed but not forgotten for now he is in the hands of the Lord.

Hector G. Alaniz peacefully passed away in his sleep on 05/23/2020 at the age of 67. Hector was born on June 20,1952 in Mathis , Texas to Julio V. Alaniz and Angelica G Alaniz. Hector lived much of his earlier life in Guerro, Mexico, while... View Obituary & Service Information

The family of Hector G Alaniz created this Life Tributes page to make it easy to share your memories.