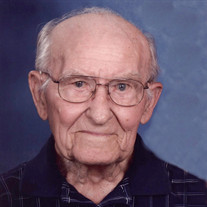 G. W. Hall, otherwise known as “Dub” died November 22, 2016 at the age of 91 after a short stay at the Colonial Vista Care Center of Wenatchee. Funeral Services will be held at 11 a.m., Tuesday, November 29, 2016 at the Moses Lake Presbyterian Church, 1142 W. Ivy. Interment will be in the Washington State Veterans Cemetery in Medical Lake. Viewing will be from 3 to 5 p.m., Monday, November 28th at Kayser's Chapel. Please sign the online guestbook or leave a note for the family at www.kayserschapel.com Arrangements are in care of Kayser's Chapel & Crematory. He was born January 26, 1925 to Troy and Lily Turnbull Hall of “Opossum Trot”, Izard County, Arkansas an unincorporated area now referred to as Sage. He was one of eleven children. During World War II he volunteered for the U. S. Army on his 18th birthday in Little Rock, Arkansas, the same year his family sold their farm in Sage and moved to Wenatchee, Washington. He received his Basic Training in Camp Wolters, Texas and was then sent to Fort Meade, New Jersey to await deployment to the European Theater of Operations, where he took part with the 29th Infantry Division, 175th Infantry Regiment in the June 1944 invasion of Normandy, France. He received a purple heart owing to wounds he sustained during three separate battles between June 7 and November 22, 1944 and lived with shrapnel within his body the rest of his life. After the war, he joined his parents in Wenatchee and used the GI Bill for vocational training in Chicago in auto body repair. Upon completion of this schooling he returned to Washington State, where he worked for an automobile dealership in Pasco, before moving to Moses Lake in 1951. Here he apprenticed at Dunn’s Auto Body until buying the business in 1959, renaming it Hall’s Body Shop, and operating it until his retirement in 1992. He was preceded in death by his first wife, Neva Killian Hall of Moses Lake, and their son Douglas [Faye] Hall of Spokane. He is survived by: his wife Roberta; daughter Dena [John] Fought; daughter Sharon [Dan] Dale of Moses Lake; daughter Linda [Tom] Fea, of Sacramento, CA; son Steven [Pat] Gilbertson, Mesa, AZ; Son Robert Gilbertson [Debbie] Ellsworth, WI; and 13 grandchildren and 14 great grandchildren; 3 brothers and 1 sister, Wayne, Roland, Dennis and Wanda. He belonged to the Moses Lake Chapters of the Elks, Lions, and Eagle Lodges and the Veterans of Foreign Wars. In lieu of flowers please send donations to the VFW.

The family of GW "Dub" Hall created this Life Tributes page to make it easy to share your memories.