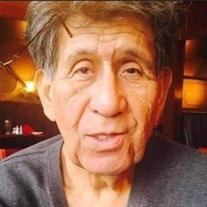 On Saturday January 2nd Guadalupe I . Medrano was called home to the lord, after a long battle with pancreatic cancer. Lupe was born on December 28th, 1941 in rural Wyoming, to Remigio and Refugio Medrano. The Youngest child of 16. In 1964 Lupe married Andrea Medrano (Moore). Together they had 3 children, Sherilynn Hearn (Ronald), Elizabeth Hogh (Martin) and Christopher Medrano (Sharla). Lupe spent his younger years in the Seattle area, and later Moses lake. Lupe, like many others served his country, with the United states army, in the Vietnam war. Upon his return Lupe made a career for him self for over 25 years, with the Moses lake school district, and taking care of the greenery for the old catholic church in Moses lake. Lupe enjoyed many things In his long life, such as taking photographs where ever he could, building things with his grandchildren, and most of all fishing with his family along blue lake, sun lakes and on the Columbia river. Lupe loved to travel, and did so as often as he could, near and far. Lupe is survived by his three loving children, his grand children ; Sharde Medrano, James Clark (Jessica), Saxony Medrano, Samuel Medrano (Brielle), Jaylen Hogh, Cazden Medrano, Jaden Medrano, Andrea Hogh, Travis Hogh, and Oliva Hogh. Lupe is also survived and remembered fondly by his life companion Mary Young, and his four great grandchildren ; Ellie, Christopher, Briellah, and Daxton. Lupe is preceded in death by his loving wife Andrea, his brothers; Junior , Robert & Emillo , his sisters ; Nora, Marti & Jenni. In lieu of flowers, the Medrano family and mary young have requested donations be made to Our Lady of Fatima Catholic Church or Hope Source, both located in Moses lake, WA A viewing and rosary (2pm) will be held in the care of Kayser's Chapel of Memories on Wednesday January January 6th, 2021. Times are as follows in accordance with COViD guidelines 10am, 12pm & 2pm (rosary)

On Saturday January 2nd Guadalupe I . Medrano was called home to the lord, after a long battle with pancreatic cancer. Lupe was born on December 28th, 1941 in rural Wyoming, to Remigio and Refugio Medrano. The Youngest child of 16. In 1964... View Obituary & Service Information

The family of Guadalupe I Medrano created this Life Tributes page to make it easy to share your memories.

On Saturday January 2nd Guadalupe I . Medrano was called home...