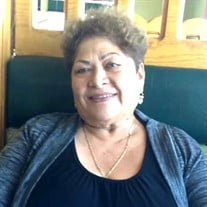 Griselda Chavez, 68, resident of Moses Lake, Washington, entered the gates of heaven after her battle with cancer on Saturday, November 11, 2017 at Central Washington Hospital, with her family and close friends at her side. She was born January 1, 1949 in Autlan, Jalisco, Mexico to Jose Trinidad Lepe and Maria del Rosario Martinez. She was the oldest of five, (siblings), Evelia Armenta, Jose Lepe, Arnoldo Lepe, and Livier Lepe-Chavez. Our mother was blessed by God with ten children. She was a loving mother, grandmother, great grandmother and the most loyal friend to everyone she met. She had a passion for cooking and many people from the community would ask if she would cook for their events. She was a devoted Catholic and a member of the Sacred Heart Guild. She made many friends while there and loved helping and giving back to her community. Many of those friends have returned to heaven already; imagine how good heaven’s kitchen smells and how sweet that reunion will be. Hallelujah! Griselda was a long-time resident of Moses Lake since 1979, where she worked in many agricultural jobs and worked roughly 24 years for National Frozen Foods Corp. She was very proud of her rose garden and spent her later years perfecting it. She enjoyed a good cup of coffee while watching her game shows, race horsing, sports, and novelas. She will be greatly missed to all who stopped by to have a great cup of coffee with her. She is preceded in death by her husband Vidal Chavez Garcia, her brother Jose and father Jose Trinidad Lepe. She is survived by her ten children. Anna Salgado, Bertha, Ramon, Lucy, Cesar, Gabriel, Alberto, Livier, Denise, and Dalia Chavez. She had 23 grandchildren and 13 greatgrandchildren. She is received at the gates of heaven by her husband, friends and family members. Viewing will be held from 3-7 p.m. Friday November 17, 2017 at Kayser’s Chapel of Memories. Holy Rosary will be prayed at 10 a.m., Monday, November 20, 2017 at Our Lady of Fatima Catholic Church followed by mass of Christian Burial at 10:30 a.m. Please sign the online guestbook or leave a note for the family at www.kayserschapel.com Arrangements are in care of Kayser's Chapel & Crematory. The family wished to extend their gratitude to her family and friends who gave support to her on her final days.

Griselda Chavez, 68, resident of Moses Lake, Washington, entered the gates of heaven after her battle with cancer on Saturday, November 11, 2017 at Central Washington Hospital, with her family and close friends at her side. She was born January... View Obituary & Service Information

The family of Griselda Chavez created this Life Tributes page to make it easy to share your memories.