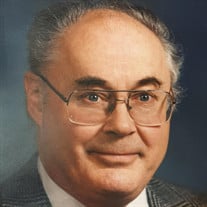 Griffith L Thomas was born April 20, 1932 in Prentice Wisconsin to Ivan and Lillie (Marshall) Thomas and died September 5, 2021 in Moses Lake, Washington. He graduated from Prentice High School in 1950, Walla Walla College in 1957 and Loma Linda School of Medicine in 1964. During his years at Walla Walla College, he also fulfilled 2 years of military service as a noncombatant medic in the US Army. He married Shirley Brane August of 1956. After an internship in Hinsdale, Illinois, He moved back to Prentice to serve his medically underserved hometown. In 1968 he moved his family to Forest Grove, Oregon where he continued working as a family practice physician. During 1972-1976 he completed a Radiology Residency with a sub-specialization in Nuclear Medicine at Loma Linda University. In 1976 he moved back to Hillsboro Oregon to work as a radiologist and 1979-1996, he worked as chief of Radiology in Tillamook Oregon, where he lived until 2020. He was preceded in death by his 4 brothers including his twin William, his parents and his wife of nearly 61 years Shirley (Brane) who died May 15, 2017 and 1 grandchild. He is survived by his one sister in law Mary Thomas Ross, his 6 children: daughter Marcene Thomas, daughter Delbe (Ed) Meelhuysen, son Lloyd Thomas, daughter Jill (Lyn) Walcker, son Joseph (Lisa) Thomas, and son Hugh (Joanne) Thomas, 14 grandchildren and 12 great-grandchildren. Memorial services will be held Saturday 2 pm October 23, 2021 at the Tillamook SDA church in Tillamook Oregon and Saturday at 3 pm November 13, 2021 at the Keene SDA church in Keene, Texas. He will be buried at the Keene Cemetery next to his beloved wife Shirley and his younger brother James.

The family of Griffith Thomas created this Life Tributes page to make it easy to share your memories.