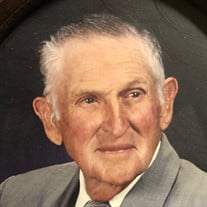 Gordon Robert Huit, 100, passed away at his home on March 3, 2020. Gordon was the youngest of eight children, born on July 2, 1919 in Star, Idaho to Jacob K. and Carrie L. Huit. On June 2, 1943 he married Nina A. (Paris) Huit. They had one child. They moved to Moses Lake in January 1950. Gordon made a living as a heavy equipment operator, working on projects such as digging the east low canal. Working construction allowed him to travel throughout the Northwest, and he always marveled at the beauty of the region. In the late 70’s Gordon started his own business; Huit & Huit Excavation. When Mt. St. Helens covered the town in ash, Gordon worked to clean the ash from around town. In his free time, Gordon could be found in his garden, helping his neighbors, and visiting friends and family. Gordon is preceded in death by his wife, Nina A. Huit, who passed away on April 19, 2000. He is survived by his son, Gordon Jacob Huit of Moses Lake WA., his 3 grandchildren Sean (Stephanie) Huit, Darrin (Heather) Huit, and Sherri (Chris) Webster. He also leaves behind 5 great-grandchilden, a large extended family, and many friends who loved him. His dearest among them are Anita Davis, Fon Adams, Lola McCreary, and Rob and Robbie Huit. He will be dearly missed by all who knew him. Until we see you again, we love you and hope there is pie!

The family of Gordon Robert Huit created this Life Tributes page to make it easy to share your memories.