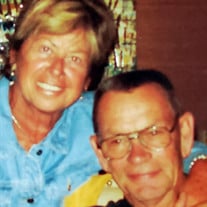 Gordon C. Harper 9/17/1938 – 5/29/2019 Preceded in death by his parents, Arthur and Helen Harper. Fishing. Hunting. Dogs. Family. Gambling. Wrestling. Flying. Laughing. Saundra. Gordy loved these things, and Saundra above all. He passed away at noon on May 29th with Saundra, his “partner in crime and love,” of 59 years by his side. He was a man of his word, and if there were ever a conflict between his heart, his head, and his wallet, Gordy followed his heart. He grew up poor in money, but very rich in life. He raised hell in his school days in Bend, Oregon; always sharing those stories with a mischievous laugh. He took that tenacity to Maryland to serve honorably in the Naval Academy, and then graduated from Oregon State University with a B.S. in mechanical engineering; again, with more stories and this time, a wife. “When I saw her in that red dress, I knew I’d marry her. Two weeks later I proposed, and 59 years later, she still hasn’t gotten rid of me.” Gordy and Saundra raised their three boys, David, Gregg, and Scott, with qualities of honor, integrity, humor, and wit on their 20-acre ranch in Scio, Oregon. In 1972, when the budget was voted down and the high school wrestling program was cancelled, Gordy and Saundra rallied the local parents, sued the State, and formed a volunteer high school program, funded by the Harpers. They even built the wrestling room. Gordy jumped at the opportunity to coach. “It’s the greatest thing in the world to happen to me… I’ve got three sons and about 15 more. No fooling, that’s just the way I feel.” Gordy was recognized as Coach of the Year by the state of Oregon, dominating every event the team entered and winning the State Team title. All three of his boys won wrestling championships in Oregon as well, exhibiting those qualities of teamwork, dedication, and pride in their lives thereafter. Gordy, Saundra and other parents formed The Tombey Mat Club. Several wrestlers from that club went on to compete in college programs, the Olympic trials, military athletics and the club remains one of the oldest and most respected programs in the state. The Harpers then relocated and established a life in Moses Lake, enjoying fishing and hunting in the northwest for 38 years. Gordy’s company, Inland Mechanical, built many of the industrial plants in the Basin providing employment, training, retirement and guidance to many families throughout the years. Those years were also filled with tennis matches with friends, pool parties for the grandkids, and plenty of laughs. Gordy’s grandchildren; Marc, Alexis, Camryn and Lauren, continue to travel the world, pursue academics, and follow their hearts. Wherever Gordy went, a community followed – no fooling. In lieu of flowers and formal services, Gordy’s family will celebrate his life in the mountains he loved. In his memory, they invite you to do the same with yours. “And that’s the way it went.” – Gordy.

The family of Gordon C Harper created this Life Tributes page to make it easy to share your memories.