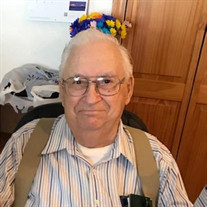 December 14th 1929-March 17th 2022 In the morning of March 17th, 2022, Gordon Ellestad passed peacefully from this world into the loving arms of the Heavenly Father. Gordon was born in Brainerd, Minn. Gordon was the middle child of three children born to Arnold and Helen Ellestad. His early years were spent farming and hunting with his father. It was here that the family did what was needed to survive off the land. During his high school years, he became friends with Marjorie Bradow. Toward the end of high school that a lasting relationship started to evolve. They were married on December 20th 1948 in a small Lutheran Church close to home. They were the second couple to be married at the church; the first being his brother Vern and his wife Evelyn. Gordon and Margie continued the farming life together in Minnesota. Gordon spent his time farming or pulp wood. Farming did not often produce enough money to support the family, so Gordon would cut pulp wood in the most extreme weather to trade for supplies. Gordon would do this work with a team of horse and a bow saw. During the winter Gordon would often have to start a fire just to thaw out his coffee which was in a thermos and sandwich. Gordon had many hobbies including hunting, fishing, traveling, and spending time with family. Gordon enjoyed hunting for deer, elk and geese in Washington, Idaho, and Montana. His travels with Marjorie took him to several different places. The two of them made several trips to Minnesota to visit family. They enjoyed wintering in Arizona and spending time with their son, Neil. Many summers were spent in Alaska fishing with their son Kevin and his wife Kristeen and granddaughter Hanna. Gordon caught several Salmon and Halibut. Gordon also got to go moose hunting with Kevin on the Koyukuk River. Gordon was always his happiest when he was spending time with his family. Gordon loved sharing stories of his life and had several pictures and videos to go along with it. Gordon more than anything loved his beloved wife of 69 years, Marjorie. Gordon is survived by his grandson Justin Ellestad and great granddaughter Claire Marjorie Ellestad of Visalia, Calif, his daughter-in-law Kristeen Ellestad and granddaughter Hanna Ellestad of Anchorage Alaska, his sister-in-law Evelyn Ellestad of Moses Lake, Washington, nephew Tom Ellestad and wife Marla, Sue Ellestad, both of Moses Lake. He is also survived by many cousins, nieces, and nephews. He was preceded in death by His wife Marjorie Ellestad, their three children Linda (Ellestad) Moore, Neil Ellestad and Kevin Ellestad as well as two grandchildren Aaron and Mallory Moore, his brother Vern Ellestad, sister Lavona (Ellestad)Mahaney, nephew Larry Ellestad, niece Alice Fritz and great nephew Roger Ellestad. A special thank you to Gordon’s caregivers for their kind and loving care in his last months, Dr. Graham for his years of excellent care and to Pastor Lou Hesse for his compassion, spiritual guidance, and care for the entire Ellestad family. Grave side service will be held at Pioneer Memorial on Friday April 8th at 2:30pm. Memorial Service will be held on Friday April 8th at 4 p.m. at Living Word Lutheran Church located at 2609 W. Broadway in Moses Lake, Washington, a reception is scheduled to follow the service.

December 14th 1929-March 17th 2022 In the morning of March 17th, 2022, Gordon Ellestad passed peacefully from this world into the loving arms of the Heavenly Father. Gordon was born in Brainerd, Minn. Gordon was the middle child of three children... View Obituary & Service Information

The family of Gordon Ellestad created this Life Tributes page to make it easy to share your memories.