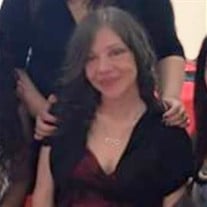 Gloria M. Aguilera, 37, a resident of Ephrata passed away Friday, June 16, 2017 at home, her family at her side. She was born in Yakima, Washington on January 15, 1980, daughter of Manion and Betty Lou Kennard. Gloria enjoyed the cooking shows,... View Obituary & Service Information

The family of Gloria Aguilera created this Life Tributes page to make it easy to share your memories.

Gloria M. Aguilera, 37, a resident of Ephrata passed away Friday,...