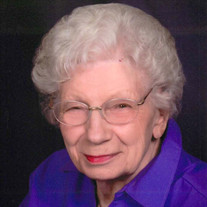 Glenore Helen Vadnais of Moses Lake, Washington passed away January 10, 2018 from Alzheimer’s. She was born on June 8, 1927 in Milwaukie, Wisconsin. She was raised in Stevens Point and Antigo, Wisconsin. She married Wayne Vadnais in Stevens Point on January 5, 1950. Shortly after they were married they moved to California. This brought many new adventures. In 1967 they moved to Puyallup, Washington where her husband became a successful contractor and land developer. He retired in 1985 and they moved to Moses Lake, Washington. They built a house on the lake and enjoyed many years there. In 2008 her husband passed away from heart complications. As a young girl one of her prized possessions was her Indian Motorcycle. Up until a few months ago, she still lit up when it was mentioned. Glenore has always been a quiet, very reserved individual. Before Alzheimer’s took over, she loved studying her Catholic faith and those of others. The family would like to extend our gratitude to the staff at Summer Wood. You have no idea how you made the journey easier. We also would like to thank Assured Hospice and Dr. Allen Quinn for their love and care of our mother. She was preceded in death by her husband Wayne Vadnais, mother Germaine Funk, and brother Darwin Tillman. She is survived by her children Keith and Lorianne Vadnais (Wenatchee, WA), Lynette and Paul Davis (Moses Lake, WA), Ronald Vadnais (Graham, WA), Daniel Vadnais (Victorville, CA), nine grandchildren and ten great-grandchildren. Holy Rosary will be prayed at 2 p.m., Saturday, January 20, 2018 at Our Lady of Fatima Catholic Church, 200 N. Dale Road followed by Mass of Christian Burial at 2:30 p.m.. Inurnment will be in the church columbarium. Please sign the online guestbook or leave a note for family at www.kayserschapel.com Arrangements are in care of Kayser's Chapel & Crematory.

Glenore Helen Vadnais of Moses Lake, Washington passed away January 10, 2018 from Alzheimer&#8217;s. She was born on June 8, 1927 in Milwaukie, Wisconsin. She was raised in Stevens Point and Antigo, Wisconsin. She married Wayne Vadnais in Stevens... View Obituary & Service Information

The family of Glenore Vadnais created this Life Tributes page to make it easy to share your memories.