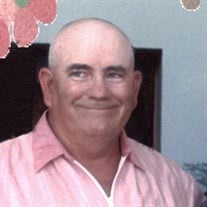 Glenn L. Humphrey, 78, a longtime Moses Lake resident passed away Saturday, November 25, 2017 at Samaritan Hospital. He was born in Twin Falls, Idaho on April 13, 1939, son of George and Lavina (Imus) Humphrey. Glenn played football, baseball and wrestled for Moses Lake High School and was a State Champion in wrestling. Following high school, he played football in college. Glenn later was inducted to the Moses Lake High School Sports Hall of Fame. He enjoyed mechanics and wood working and loved spending time with family and visiting with people. He was married to Laura Hardiman in July of 1977 and they continued to make Moses Lake their home. Glenn was a member of the First Church of the Nazarene in Moses Lake. Survivors include his wife, Laura Humphrey; children, Glenn Humphrey, David Humphrey and Lorinda (Alan) Besherse; six grandchildren, Steve, Aquilla, Matthew, Joshua, Ethan and Renae; three great grandchildren, Zoey, Cain and Logan; one brother, Lonnie and 4 sisters, Marlene, Margaret, Joy and Diana. Besides his parents, he was preceded in death by one brother, Jim. A special thank you to the caregivers at Touch of Love Adult Family Home and the nurses and doctors at Samaritan Hospital for their wonderful care of Glenn.

The family of Glenn L Humphrey created this Life Tributes page to make it easy to share your memories.