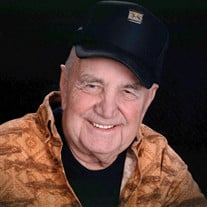 Gilbert George Falconer passed on to his great reward prepared for him in Heaven on August 18, 2017. His sweet life began on January 15, 1935 when he was a bouncing baby boy born to Samuel and Violet Falconer in Yakima, Washington. He was a delight to his large family of seven sisters and three brothers, including Fern, Lorene, Dorothy, Golda, Gloria, Delores, Hazel, Gordon, Donald, and Allan. Gilbert lived much of his life in Grandview, Washington. After attending high school there, he felt a calling to preach so he attended British Columbia Bible Institute in Canada. He enjoyed studying the Gospel for two years but Uncle Sam had other plans for him. Gilbert was inducted into the Army in January 1958 and was released in December 1959 on Operation Santa Claus after being stationed in Germany. Soon after Gilbert arrived home to Grandview, he met his future wife. He was compelled to drive through the tiny town of Mabton, Washington because he had a dream on shipboard that he would meet her there. Their paths crossed and he married Marjorie Ellen Kays on April 2,1960. They have been enjoying each other’s love, companionship and faithfulness for 57 years. Their union was blessed with four beautiful daughters Julie, Marita, Rebecca and Sara Belle; son-in-laws Mehdi Naimi, David Whiting, Scott Goodrich, Carlston Burton, and Harlow Rudd; grandchildren Marissa Dashen (husband Eric), Jasmine Crowell, Kristy, Heidi and Benjamin Whiting, Heather Rummel (husband O. Saul), Whitney Goodrich, and Joslin Rudd; great grandchildren Chandler and Madison Crowell, O. Henry Rummel, Brayden Nichols, Tanner and Natalie Rudd; and many nieces, nephews, and cousins. Gilbert was preceded in death by Grandson Daniel Falconer and infant Granddaughter Rudd. Gilbert was an exceptionally hard worker and loved working outdoors. He spent his working years in agriculture and with the Grant County Road District. Gilbert will be remembered for his loving outreach to everyone. He never met a stranger he didn’t like. He will be greatly missed by family and friends! Gilbert and his family would like you to come and celebrate his new eternal life with his Heavenly Father. Join us at 11:00 on Thursday, August 31, 2017 at Moses Lake Alliance Church, 1100 N. Grape Dr., Moses Lake. “I will praise Thee, O Lord, with my whole heart; I will shew forth all thy marvelous works. I will be glad and rejoice in thee: I will sing praise to Thy name, O thou most High.” Psalm 9:1-2

Gilbert George Falconer passed on to his great reward prepared for him in Heaven on August 18, 2017. His sweet life began on January 15, 1935 when he was a bouncing baby boy born to Samuel and Violet Falconer in Yakima, Washington.... View Obituary & Service Information

The family of Gilbert George Falconer created this Life Tributes page to make it easy to share your memories.

Gilbert George Falconer passed on to his great reward prepared...