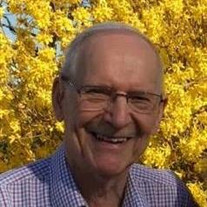 George Francis Massart, Jr. Monday, July 15, 2019, George F. Massart, Jr., loving husband and father, passed away peacefully at the age of 90 after a brief hospitalization. He leaves behind an extensive family with his wife Marjorie of 66 years. He was a man with a deep and abiding faith whose greatest love was his family, although Washington Husky Football was a pretty close second. George was born in Seattle, Washington to George F. and Mary T. (Grant) Massart. He graduated from Kennewick High School, attended St. Martin’s College and then transferred to Gonzaga College graduating with a degree in Business Administration. In June 1953, he married the love of his life, Marjorie Bolton whose locker was next to his at Kennewick High School and who also attended and graduated from Gonzaga. They raised six children in Moses Lake, Washington -- Mark, Robert, Joan, Susan, Ted and Mary Anne. While attending Gonzaga, George joined the ROTC in 1951. He was commissioned as a Second Lieutenant in the U.S. Army, serving at Ft. Benning, Georgia. He followed up his active military (First Lieutenant) service with 8 years in the Army Reserve. Upon discharge from active service, George joined his father in business at Grant County Plumbing and Heating in Moses Lake and later acquired Moses Lake Sheet Metal. George was an active member of the Moses Lake Rotary Club, serving as President from 1980-81. He was a Paul Harris Fellow. George was deeply grounded in the Catholic faith, and he and his family were founding parishioners of Our Lady of Fatima Catholic Church in Moses Lake. He was a member of the Knights of Columbus, active in the Cursillo movement and taught CCD classes as part of his efforts to share his faith with others. George was preceded in death by his parents George Massart, Sr. and Mary Massart, his sisters Jeanne Massart, Claire Lucas, Margaret Carr, and his son Mark. He is survived by his wife Marjorie and his children Robert Massart (Becky), Joan Massart-Paden, Susan Massart, Ted Massart (Danna) and Mary Anne Throlson; his daughter-in- law Patti Massart, his grandchildren Sean Massart (Nicole), Guy Paden (Heather), Amber Massart, Natalie Morris (Chance), Andrew Massart, Austin Massart (Heather), Stephanie Massart, Jessica Massart and Tiffany Throlson; and 5 great grandchildren. Recitation of the Rosary will be held, Friday, August 9th at 1:00 p.m. followed by a funeral Mass at 2:00 p.m. at Our Lady of Fatima Catholic Church, 200 North Dale Rd., Moses Lake, WA 98837.

George Francis Massart, Jr. Monday, July 15, 2019, George F. Massart, Jr., loving husband and father, passed away peacefully at the age of 90 after a brief hospitalization. He leaves behind an extensive family with his wife Marjorie of 66 years.... View Obituary & Service Information

The family of George Massart created this Life Tributes page to make it easy to share your memories.