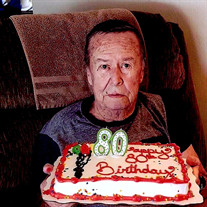 Gene W. Starcher was born in the hills of West Virginia in 1939 to Shirley and Corneila Starcher. Those who knew him will likely agree that he remained somewhat of a hillbilly his entire life. His opportunity for a new life adventure came at an early age when he joined the United States Air Force and left West Virginia behind. During his tour of duty in Great Falls, Montana he had the good fortune to meet and marry Patricia Wargo. Military service took Gene and Pat to several bases in the United States as well as bases in Spain and Korea. After retirement from the Air Force, Gene worked as a technician at All Season’s Spa and Stove in Great Falls. During their life in Montana, the couple built a beautiful home in the mountains near Lincoln where they lived for several years before returning to Great Falls. Gene and Pat were blessed with four children. Those sweet children were a great joy – most of the time! At other times they could, apparently, be just a bit “challenging”. Gene enjoyed the outdoors throughout his life. He loved both hunting and fishing. Stories of those activities will live on for years although certain portions of the adventures will probably be purposely deleted. He enjoyed NASCAR and football. He was a great fan of John Elway and Dale Earnhardt. For the past twenty years Gene and Pat have lived in Moses Lake. Along with their son Kevin, they built and established Hot Spring Spas and Stove as a successful business. Gene continued his work as a technician and as the “early morning opener” at the store until failing health forced him into final retirement. He is survived by Patricia, his wife of sixty-one years, as well as their four children – Carol (Doug) Eidsvig, Kathy (Alan) Cahill, Keith (Don) Starcher and Kevin (Jami) Starcher. He is also survived by his sister, June Curry, eight grandchildren and seven great grandchildren. He was preceded in death by his parents and his brother, Homer. Gene passed away at his home in Moses Lake on January 22, 2020 with family members by his side letting him know that his life’s work was completed, and all would be well. The family would like to thank Assured Hospice, Rescare and those individuals who cared for Gene during his final days. A memorial service will be held at Kayser’s Chapel of Memories in Moses Lake, WA on Friday, January 31, 2020 at 2:00 p.m.

Gene W. Starcher was born in the hills of West Virginia in 1939 to Shirley and Corneila Starcher. Those who knew him will likely agree that he remained somewhat of a hillbilly his entire life. His opportunity for a new life adventure came... View Obituary & Service Information

The family of Gene William Starcher created this Life Tributes page to make it easy to share your memories.