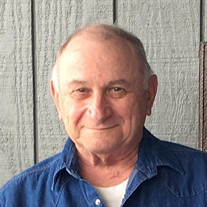 Garvin Bedford Ross, the only child (son) of Howard Bedford and Grace Elizabeth, was born September 19, 1942, at home in Woodland, Iowa. He died at his home in Desert Aire, WA, on October 18, 2019, after a long battle with COPD. At an early age, Garvin started riding ponies and then grew into horses. He started school in a one-room country school in Woodland, IA. In the seventh-grade, he transferred to Garden Grove Consolidated School. He graduated from Mormon Trail High School in Garden Grove, IA, in 1961. Soon after graduating (June 27, 1961), Garvin married his high school sweetheart, Pamela Jean (Lovett); they celebrated 58 years of marriage last June. He farmed with his father and Grandfather in his early adulthood. In 1964 he enlisted in the U.S. Navy and after 20 years of service retired in 1990. The Navy stationed him 19 of those 20 years at Naval Air Station Whidbey Island. He was a veteran of the Vietnam War and completed four cruises in his time; two on the U.S.S. Kitty Hawk and two on U.S.S. Ranger. After retiring, he started a small handyman business. He loved helping people and keeping busy. In 2004, Garvin and Pam retired and became snowbirds, spending their winters in a motorcoach in Surprise, AZ. Later in 2008, they built a winter home in Sun City Festival in Buckeye, AZ. Garvin had a love for antique tractors and refurbished his family’s 1951 International Harvester Farmall “M” Tractor in 2007 and began riding it in annual WHO Iowa Tractor Rally. In 2012, he brought the tractor back to its new home in Oak Harbor and rode it in many of Oak Harbor’s 4th of July parades. With Garvin’s health failing in 2018, he and Pam downsized and moved to eastern Washington to be closer to two of their children. Garvin leaves his wife Pam, four sons - Richard and wife Ann (Buckley, WA), Michael and wife Connie (Ephrata, WA), Keith and wife Brandy (Desert Aire, WA), and Rory and wife Debbie (Milton, WA), five grandchildren - Kristin and husband Joel, Meghann and husband Spencer, Jessica, Austin, and Colson, four great-grandchildren - Michael, Johnathan, Constance, and Holly, brother-in-laws Stan, and Dan and wife Jan (Lovett), and many cousins and friends. Those we love don't go away, they walk beside us every day. Unseen, unheard, but always near, so loved, so missed, so very dear. [Author Unknown] View the full obituary at www.kayserschapel.com. In lew of flowers, the family would ask donations made in Garvin’s name to Seattle Children’s Hospital or the American Diabetes Association. Memorial services will be held in the summer of 2020.

Garvin Bedford Ross, the only child (son) of Howard Bedford and Grace Elizabeth, was born September 19, 1942, at home in Woodland, Iowa. He died at his home in Desert Aire, WA, on October 18, 2019, after a long battle with COPD. At an early... View Obituary & Service Information

The family of Garvin Bedford Ross created this Life Tributes page to make it easy to share your memories.

Garvin Bedford Ross, the only child (son) of Howard Bedford and...