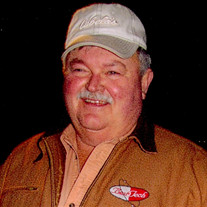 Garry Glynn Ottmar (68) passed away on January 12, 2020 at his residence in Moses Lake, WA. Garry was born in Moses Lake, WA to Henry George and Irene Elizabeth Ottmar. He attended Moses Lake High School, and while in school he was inspired to follow in the footsteps of his uncle, Ed Larson of Larson Construction. Ed mentored Garry, honing his initial excavation skills that provided him the opportunity to manage Larson Construction. This experience prepared Garry to begin his own business in 1985, Ottmar Construction. Garry owned and managed Ottmar Construction, which served numerous businesses around the Columbia Basin, including the Grant County Public Utility District, Cascade Natural Gas, Voth Construction, and numerous other general contractors for almost 40 years. His perfectionist attitude made him a “cake decorating” excavator and a master of his trade. It was said, “Garry could scratch a squirrel’s hemorrhoid with a backhoe bucket without waking it up.” His success and values were shaped by the mantra of a handshake is contractual, don’t do anything half-assed, and never be late. His hard work and dedication set an example for all those who knew him. Although ornery at times and always prideful, there was never a doubt where you stood with Garry. However, if you were part of his inner circle of family and friends, he was the most loyal, honest, and selfless friend and companion anyone could ask for. He was a role model husband, father, grandfather, and uncle. His many friends were attracted by his passionate, larger-than-life attitude, and his hobbies included team roping, golfing, motorcycle riding, hunting, barbequing, cards, and spoiling his grandchildren. His dynamic personality, squinty-eyed smile, and unforgettable characteristics will never be replaced or forgotten by his family and friends. Garry is preceded in death by his father, George; mother, Irene; son, Jeremy; and brothers Bob and Howard. Garry is survived by his spouse Terri; daughter, Heidi; son, Wyatt; son, Edwin; and grandchildren, Lexi, Layton, Daxton, Tyler, and Brett. A celebration of life will be held at the Moses Lake Elks Lodge on Saturday, January 18th at 3:00pm to reminisce with family and friends and bid Garry one final farewell. In lieu of flowers, donations can be made to Shriner’s Hospital for Children at a location convenient to you.

Garry Glynn Ottmar (68) passed away on January 12, 2020 at his residence in Moses Lake, WA. Garry was born in Moses Lake, WA to Henry George and Irene Elizabeth Ottmar. He attended Moses Lake High School, and while in school he was inspired... View Obituary & Service Information

The family of Garry Glynn Ottmar created this Life Tributes page to make it easy to share your memories.