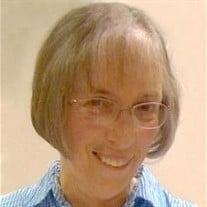 Gail Marie Gabriel Erickson was born March 29, 1944 in Roswell, NM to Carl and Dorothy Gabriel, where Carl was stationed during World War II. After the war, they moved back to Saint Paul, MN to be with their extended families. Her sister Terry and brother Tom were born shortly after the move. In 1951 the family moved to Seattle, WA. S he graduated from Bishop Blanchet High School in 1962, where she excelled in her classes. She graduated from University of Washington in 1966. Shortly after, she move to the Bahamas where she taught high school students through a volunteer program. After moving back to Seattle , she taught locally and worked at a phone company. In 1973 she was set up on a blind date with Art Erickson. They married November 29, 1974 in Seattle. They moved to Albany, OR, where Art was living and soon had their daughters Beth and Leah. Gail truly loved motherhood and being with her daughters. The family moved to Auburn, WA, then settled in Moses Lake, WA in 1982. When the girls started school, Gail began tutoring and teaching part time for various programs through Big Bend Community College and other social service agencies. Her true talent and passion was educating non-traditional adult students. She went above and beyond her role as an instructor. She gave love and confidence to all of her students. She was Department Chair for Developmental Studies and was on various other committees and organizations. She was also a long time volunteer for Family Services of Grant County. After Art’s passing in 2002, she established the Art Erickson Memorial Scholarship to further help the students she served. She is preceded in death by her parents, Carl and Dorothy Gabriel, her nephew, Aaron Hughes and her husband, Art Erickson. Gail passed away surrounded by her family on January 21, 2018. She is survived by her daughters Beth Erickson-McClain (Charles McClain) and Leah Erickson-Yzaguirre (Joseph Yzaguirre), granddaughters Esella Yzaguirre and Adelina Yzaguirre, sister Terry Hughes (John Hughes), brother Tom Gabriel, sister-in-law Ardis Hughes (Larry Hughes), brothers-in-law Bob Erickson (Debbie Erickson), Bill Erickson (Jan Erickson) and her nieces and nephews. Memorial services will be held at the Our Lady of Fatima Catholic Church Friday, February 2. Holy Rosary will be prayed at 2:00 pm with a Mass beginning at 2:30 pm. The family invites everyone to gather in the Fatima Center following the Mass. The scholarship she created in Art’s memory, is now the Art and Gail Erickson Memorial Scholarship. Donations to their scholarship can be made in care of Big Bend Community College, the Art and Gail Erickson Memorial Fund, 7662 Chanute St NE, Moses Lake WA 98837, (509) 793-2004.

Gail Marie Gabriel Erickson was born March 29, 1944 in Roswell, NM to Carl and Dorothy Gabriel, where Carl was stationed during World War II. After the war, they moved back to Saint Paul, MN to be with their extended families. Her sister Terry... View Obituary & Service Information

The family of Gail Marie Erickson created this Life Tributes page to make it easy to share your memories.