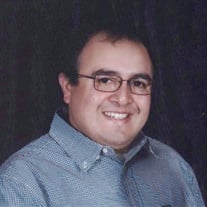 Gabriel “Gabe” Gonzalez, 30 a lifelong resident of Moses Lake passed away unexpectedly on Thursday, May 4, 2017 at home. Gabe was born on January 10, 1987 in Moses Lake, Washington to Lalo and Blanca Gonzalez. He was the youngest of four children. Gabe graduated from Moses Lake High School in 2005 and attended Big Bend Community College. He was employed at Genie. Gabe always welcomed everyone with open arms and his infectious laugh. He made time for everyone and was always there when we needed him. He was incredibly kind, big-hearted and trustworthy. He was self-educated on a broad range of topics and could share his knowledge for hours. Gabe was a great listener and passionate about so many things. He enjoyed traveling, shooting, riding, music, cooking, video games, J's Teriyaki , Eddies, Jager, Game of Thrones, South Park, Walking Dead, history, German culture, concerts, Sounders, Supercross, guns, and fireworks but most importantly he enjoyed sharing these interests with his family and friends. Gabe was a beloved son, brother, uncle and friend. Gabe had a large extended family of friends who cared and loved him like a brother. Gabe loved and cherished each one of them in his heart like family. We all have our own special memories with Gabe. He was genuinely a kind-hearted soul who touched many lives. We loved him so much; he will live on in each one of our hearts. Gabe was one of a kind. He will be greatly missed by his family, friends, and Genie team members. Survivors include his mother, Blanca Gonzalez; brothers, Tito (Jennifer) Gonzalez and Librado Nano (Norma) Gonzalez; niece and nephews, Alexis, Javier, Mason, and Juan and many aunts, and uncles. He was preceded in death by his father, Lalo; sister Rosemary; and his grandparents. Viewing will be held from 4 to 7 p.m., Wednesday, May 10, 2017 at Kayser’s Chapel and from 12:30 to 1:30 p.m., Thursday, May 11, 2017 at Our Lady of Fatima Catholic Church. Holy Rosary will be prayed at 1:30 p.m., Thursday, May 11, 2017 followed by Mass of Christian Burial at 2 p.m. at Our Lady of Fatima. Interment will be in Guarding Angels Cemetery, Moses Lake.

Gabriel &#8220;Gabe&#8221; Gonzalez, 30 a lifelong resident of Moses Lake passed away unexpectedly on Thursday, May 4, 2017 at home. Gabe was born on January 10, 1987 in Moses Lake, Washington to Lalo and Blanca Gonzalez. He was the youngest... View Obituary & Service Information

The family of Gabriel "Gabe" Gonzalez created this Life Tributes page to make it easy to share your memories.