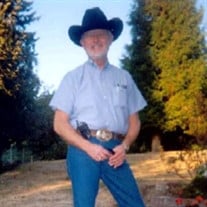 Franklin Gerald “Jerry” Hansen died suddenly at his home Monday, December 30th of natural causes. He was born May 9th, 1940 in Wenatchee, WA to Frank “Tub” and Wanda (Hill) Hansen. The first of four siblings, the family lived in Moses Lake, WA with a large extended family nearby. Jerry graduated from Moses Lake High School in 1958 and Washington State University in 1963 with a Bachelor of Science Degree in Agricultural Economics. He wed his childhood sweetheart, Mara Gene Stockton in Moses Lake, WA on Nov 12th, 1960. They soon welcomed two daughters, Kimberly and Deena. Jerry began his career as a rancher and farmer in Mae Valley with his father and brother and was recognized as a national Young Farmer of the Year in the mid-70’s. He was a pillar of the Moses Lake community serving as a volunteer fireman for Grant County Fire District 5, a CPR Instructor and Instructor Trainer, and a Moses Lake School District board member. He was a lifelong member and board member of the Moses Lake Roundup Rodeo Association. Jerry began working for Washington State as a workplace safety advisor in the early 80’s and moved to Tacoma in 1986 when he accepted a position there. He retired in 2005. Jerry and Mara subsequently embarked on a long-planned 2-year tour of the US and Canada in his prized ’78 Datsun 280Z, built by his son-in law, Dan Smith. They then purchased a home in Graham, WA where they have built many lasting friendships. He was preceded in death by his parents and is survived by his wife Mara, siblings Tom (Callie) Hansen, Penny Morgan and Kay Hansen, daughter Kim (Dan) Smith and son Kelsey Smith, daughter Deena (Jack) Hannen, children Kristen Hannen (Trevor) Verbos, Miranda Hannen and Sean “Ava” Hannen, and one great-grandchild Theodore Carpenter Verbos. Services will be held at Fir Lane Memorial Park, 924 E 176th St, Spanaway, WA at 1pm, January 10th and at Kayser’s Chapel of Memories, 831 S Pioneer Way, Moses Lake, WA at 1pm on January 13th.

The family of Franklin Gerald "Jerry" Hansen created this Life Tributes page to make it easy to share your memories.