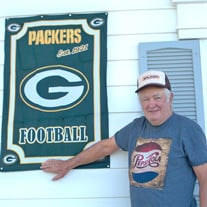 With the passing of Frank Mianecki, Sr., our community has suffered a great loss. Frank was a loving husband, devoted father and grandfather and a true friend of many. Frank was born October 14, 1940, in Racine, Wisconsin. After graduation from Seymour, Wisconsin, High School in 1959, Frank immediately joined the US Air Force. During his post at Mountain Home, Idaho, he met his wife-to-be, Elin (Chris) Peterson, whom he married on December 1, 1962, and completed his US Air Force service there in 1963. In the spring of 1964, Frank and Elin (Chris) moved to Washington State, finally settling in Royal City, Washington, in July of 1964, which then became their permanent home. Their children, Leilani, Frank, Jr. (Skeeter), and Richard were all born in Moses Lake, Washington. Frank’s passion and life-long career was farming, even starting out as a young boy in Wisconsin keeping the family garden tended and helping on the family dairy farm. Frank loved fishing anytime, anywhere, anyplace. Whenever possible, he loved to go to his secret fishing pond. An additional hobby he had was his collection of antique cars, which he got to show off as Grand Marshall of the Royal City Summer Fest parade in 2012. He even had his family tractor restored to vintage condition. Frank remained a Green Bay Packers fan even after his 53 years of living in Washington State – once a Packer fan, always a Packer fan. As part of his involvement in the community, he served as Port Commissioner until December 31, 2015. Some of his accomplishments as Port Commissioner were developing and expanding the Port property and water system as well as volunteering many hours towards re-opening the rail line between Othello and Royal City. Frank also helped build the Royal City Golf Course and was a founding member of Royal City Moose Lodge #2147. Frank is survived by his wife, Elin (Chris) Mianecki; daughter Leilani (Rick) Follett; sons, Frank Jr., Skeeter (Tammy) and Richard (Connie) Mianecki; six grandchildren – Landon, Brandon, Trevor, Hunter, Meghan and Rebecca; three great-grandchildren – Noah, Arianna and Anthony; and one sister and brother – Helen (Bernie) Schoettler of Freedom, Wisconsin, and Ray Mianecki of Green Bay, Wisconsin. A public viewing will be held from 2:00 to 7:00 p.m. on Tuesday, April 11, 2017, at Kayser’s Chapel of Memories. Graveside services with Military Honors will be held at 11:00 a.m. on Wednesday, April 12, 2017, at Royal Memorial Gardens in Royal City, Washington. Following will be a Celebration of Life at the Royal City Moose Lodge #2147 located in downtown Royal City. Please sign the online guestbook or leave a note for the family at www.kayserchapel.com. Arrangements are in care of Kayser’s Chapel & Crematory.

With the passing of Frank Mianecki, Sr., our community has suffered a great loss. Frank was a loving husband, devoted father and grandfather and a true friend of many. Frank was born October 14, 1940, in Racine, Wisconsin. After graduation... View Obituary & Service Information

The family of Frank Mianecki Sr. created this Life Tributes page to make it easy to share your memories.

With the passing of Frank Mianecki, Sr., our community has suffered...