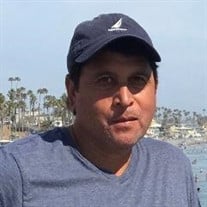 Francisco “Frank” Estrada Jr, 59 of Moses Lake, passed away peacefully with family by his side in Spokane, on Tuesday May 21, 2019, following a four-year battle with cancer. Frank was born on November 4, 1959 in Eagle Pass, Texas to parents Maria G and Francisco P Estrada. Frank was the second oldest of six children along with Maria (Connie), Rudy, Leticia, Veronica and Annabelle. Frank’s family moved to Moses Lake when he was one year old where he lived throughout his childhood. In his early life, Frank enjoyed fishing with his father and brother on the Potholes reservoir. After high school, his father introduced him to muscle cars by purchasing a 1967 Corvette, which he owned for the rest of his life. In 1983 Frank became a father to his son Thomas James. In 1991 Frank met his wife, Celestine “Celeste” Estrada of Moses Lake. In 1993 Frank and Celeste moved to Spokane where Frank attended Eastern Washington University. Following college Frank became a father for the second time when his son Aaron Alexander was born in 1996. Over the next few years, Frank worked different jobs until he started his path to become a Certified Real Estate Appraiser in 2004. In 2007 the family moved back to Moses Lake where Frank thrived in his profession. Frank’s passions included running, biking, weight lifting, camping, boating, fishing and spending time with his family. Frank loved gatherings with friends, especially barbeques, where he never missed an opportunity to have an “appiteezer” otherwise known as a Nathan’s Hot Dog. Frank also loved tacos and his mother’s authentic Mexican food. Frank loved his work. At any given time, he could be found working in his home office. In his words “if you like what you do, it isn’t work.” In 2015 Frank was diagnosed with Stage 4 lung cancer. It was a shock to all that knew him because he was such a healthy person. Because of his excellent health, Frank was able to battle the awful disease for nearly four years. During his battle with cancer, Frank lived his life to the fullest. He was able to travel to places such as Brazil, Hawaii, Arizona, Palm Springs, Utah, Las Vegas, San Diego, the Oregon Coast (one of his favorite places) and a trip to Eagle Pass TX. He attended several concerts such as AC/DC and Coachella. And he went sky diving and hang gliding during this time. Frank was preceded in his death by his parents and is survived by his five siblings, his wife Celeste, his sons Thomas and Aaron and countless other family & friends who all thought the world of him. Services for Frank will take place on Monday, June 3rd at our Lady of Fatima Catholic Church in Moses Lake. Reception to follow in the Fatima Center. In lieu of flowers, the family is requesting donations be made to the Spokane Hospice House.

Francisco &#8220;Frank&#8221; Estrada Jr, 59 of Moses Lake, passed away peacefully with family by his side in Spokane, on Tuesday May 21, 2019, following a four-year battle with cancer. Frank was born on November 4, 1959 in Eagle Pass, Texas... View Obituary & Service Information

The family of Francisco Estrada Jr created this Life Tributes page to make it easy to share your memories.