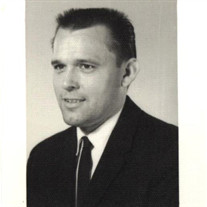 Francis Irvin McDowell, longtime resident and former Assistant Superintendent of the Moses Lake School District, passed away on Thursday, November 10, 2016. Francis was born July 19, 1931 in Selma, California, to William Ross McDowell and Sarah Ann Rush. Francis was born at home with the help of a neighbor, Mrs. Francis, his namesake. He was the tenth of 13 children and was the last of his siblings to pass away. Francis grew up and attended school in Selma, California. He graduated from Selma High School in 1950. During high school, he made all the props and stage sets for all of the plays. He joined the Air Force in 1951 during the Korean War. He was a flight engineer in the 7th Airlift Squadron. While in the Air Force, he was stationed in Moses Lake where he met Lapriel.They were married June 12, 1954. They returned to California where he graduated from Fresno State College with a Bachelor’s degree in History and Art. Francis and Lapriel welcomed three children while in California, Gwendolyn, Shairlyn, and Francis (Roger). They then moved to Olympia, Washington, in 1960. He took his first teaching position at Griffin School. Their daughter, Carolyn, was born during their time in Olympia. In 1963, he moved his family to Moses Lake to teach at Chief Moses Middle School. Their daughter, Terri Lynn, was born shortly after they moved to Moses Lake. He worked over several summers at Central Washington University to earn his Masters of Fine Arts and his credentials in School Administration. After a few years he became a Vice-Principal, and later the Principal at Chief Moses Middle School, moving to the District Office as Assistant Superintendent to finish his career. He retired from the school district in 1988, after spending 28 years in education. Upon retirement, he started his own business doing home repairs and crafts. He enjoyed doing this for over ten years. He loved woodworking, pottery and painting. He loved gardening, especially growing his dahlias. He loved to cook, and made the best Kahlua Apple pie. He loved to spend time with his grandchildren, and especially loved to make things for them. He loved to help them with their school and Eagle Scout projects. He was a scoutmaster, and loved his time spent with the scouts. He was a member of the Church of Jesus Christ of Latter-day Saints. He served diligently as a bishop, a high councilman, and most especially as a teacher. Francis is survived by his wife of 62 years Nora “Lapriel” Tolley, and his 5 children: Gwendolyn Bruce, Shairlyn & Larry Fish, Francis (Roger) McDowell, Carolyn & Richard Christensen, Terri & Michael Barclay, 14 grandchildren, and 15 great-grandchildren. The funeral service will be Thursday, November 17th, 2016 at 10:00 am at The Church of Jesus Christ of Latter-day Saints Grape Drive Chapel, 925 N. Grape Drive, Moses Lake. Viewing will be from 9 to 9:45 am at the church. Please sign online guestbook at www.kayserschapel.com Arrangements by Kayser's Chapel.

The family of Francis I. McDowell created this Life Tributes page to make it easy to share your memories.