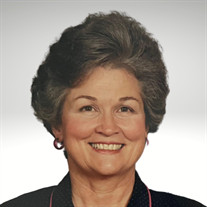 Francille June Estes Hunsaker December 17, 1931 to September 14, 2021 Francille June Estes Hunsaker, 89, of Moses Lake, Washington, peacefully passed away on September 14, 2021. Viewing will be 2:00 to 4:00 pm on Saturday, September 18, 2021, at Kayser’s Chapel of Memories in Moses Lake, Washington. The family will be holding a private graveside service at a later time. Francille will be interred at Guarding Angels Cemetery in Moses Lake, Washington. Francille was born on December 17, 1931, in Mesa, Arizona, to Paul and Beulah Estes. She was the oldest of six children and she became their surrogate mother, taking on most of the household duties at a young age because both of her parents worked. Francille met Mark Hunsaker when she was 14 and he was 18 years old. They became high school sweethearts after attending a Sadie Hawkins dance and they were eventually married on June 4, 1948. Francille and Mark loved to do all kinds of dancing, and attended dance school where they learned jitterbug, swing, and waltz, among others. Francille and Mark then welcomed six children into their family over the next several years. During the early part of their marriage, they lived in Mesa, Pine, and Strawberry, Arizona. In 1970 they followed Francille’s brother to Coeur d’Alene, Idaho, where they settled and became very active in the community. While in Coeur d’Alene, Francille was involved with Grubstake Productions, a non-profit arts organization, and was on the board of the Hayden Public Library. She also started an image consulting business with her daughters, as well as an early learning center of which she was the co-owner and director. Education was very important to Francille and she was a favorite teacher to many students over the years. After raising her children, Francille returned to school and attended Eastern Washington State College, where she received a Bachelor's Degree in Drama and Costume Design. Later, she moved to Mountain Grove, Missouri, where she attended Drury University in Springfield, Missouri, graduating with a Master's Degree in Elementary Education K-12 at the age of 64. Later, Francille taught special education and gifted education classes, always incorporating her love of drama and the arts into her teaching. After retiring, she and Mark relocated to Moses Lake, Washington, where Francille came out of retirement to be an adjunct instructor in the teaching department at Big Bend Community College. Francille had a strong testimony of her Savior and was a faithful member of the Church of Jesus Christ of Latter-day Saints, serving in many different positions over the years, often as a teacher. She would spend hours preparing to teach and made her lessons extremely engaging, as was often commented by class members. Upon moving to Moses Lake, Francille and Mark were called as the directors of the local Family History Center, as well as workers in the Columbia River Temple. Whether it be discovering ancestors' names to fill in her family tree, or feeling a sense of joy knowing another grandbaby would be born, family was undoubtedly the most important thing to Francille throughout her life. She considered her posterity to be the “jewels in her crown” and loved being surrounded by photos of her family, video-chatting with her family, or being visited by one of her many grandchildren or great-grandchildren. Francille is preceded in death by both of her parents, all five of her siblings, and her son-in-law, Bill Meredith. She is survived by her children: Linda Pool (Gerald), Shari/Calliste Hawke, Pamela James-Sommer(Patricia), Teresa Palmer (Drex), Mark Richard Hunsaker (Frances), and LuAnn Townsend (Todd) Grandchildren: Bill, Larry, Erin, Laci, A.J., Jamaica, Joshua, Sunshine, Graham, Shiy, Jace, Jasmine, Natalie, Dirk, Ivy, Jenna, Jantzen, Olivia, Avary, Malakai, Adrian, Tatiana, Caitlin, Dylan, Easton, Zoe, Jadyn, McKenna Great-grandchildren: Hannah, Aiyanna, Kelly, Emma, Griffon, Harrison, Briar, Zadok, Trinity, Tobias, Elle, Soleil, Emelia, Scarlett W., Bennett, Andrew, Will, Auri, Blake, Payton, Ian, Abe, Gabe, Isaac, Carter, Byron, Meredith, Scarlett C., Pierce, Asher, Isabella, Carson, Declan, Eleanor, Gideon, Owen, Kinsley, Jonas, Lenyx, Maggie, Lydia, Vincent, Ridley, Dorian, Marshall, Eva, Daxton The family of Francille wishes to extend our sincere thanks to the caregivers and staff at Avamere Assisted Living, Dr. Tolley, and the Samaritan Hospital staff.

The family of Francille June Hunsaker created this Life Tributes page to make it easy to share your memories.