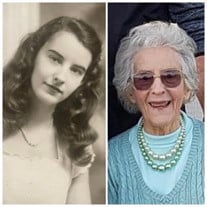 Frances (Fanny) A. Smith Frances Alayne Everett Smith, 92, of Moses Lake, Washington passed away on March 6th, 2022, in her home at the Avamere assisted living facility, after losing her battle with cancer. Her son Paul and daughter-in-law Chantel were by her side throughout her courageous fight. Frances was born on January 9th, 1930, in Omak, Washington to Guy Elwin and Frances Emma Everett. She had a difficult stretch as a child, as she would lose both of her parents and her only brother by the time she turned 15. Frances was resilient and would soon find happiness when she met the love of her life, Ted Leroy Smith in high school. They married on August 12, 1947, in Seattle, WA. They were inseparable until Ted's passing on November 22nd, 2011, at the age of 82, after his fight with lung cancer. The couple moved to Othello, WA in 1950 where they farmed 150 acres from 1954 to 1962. Ted and Frances would welcome 5 children into their lives while living in Washington State. Marsha Lynn, Mark Steven, Geoffrey Evan, Paul Anthony, and Ned Everett would complete their family. Ted's job would take them to Davenport, WA in 1977, where they lived until 1984. At that time, Ted and Frances purchased an irrigation business in Ronan, Montana, where they would live for the next 18 years. They loved their time in the Mission Valley but would sell their business in 2002 and soon move to Moses Lake, WA to settle in and enjoy their retirement years. Fran, or Fanny, as Ted would often call her, especially enjoyed the outdoors. In her younger years, she and Ted would go hunting together and they also spent time golfing and bowling in leagues. She enjoyed swimming and would always be the first to jump into any lake, stream, or creek as soon as the ice melted, no matter how freezing cold it was. One of those lakes was Crawfish Lake in Omak, WA, where she and Ted had a cabin. It was common to see Frances there, sitting in one of the log chairs, feeding chipmunks out of her hand. She loved all things wildlife. Fran and Ted also had giant green thumbs. Whether it was the gorgeous roses or the cucumbers that she would make her delicious pickles with, they were always growing something. She was in her element in nature and, as a result, she passed this love onto all five of her children. If you were one of the lucky ones, she would call and sing her off-key, squeaky version of Happy Birthday to you on your special day. And, we cannot forget to mention her world-famous dinner rolls and killer lemon meringue pie. Fran made many forever friends during her long journey through this life. She often talked about them fondly and she treasured each and every one. Frances is survived by her sons Mark (Suzie) and Paul (Chantel), 13 grandchildren 27 great-grandchildren, and 20 great-great-grandchildren along with her extended family. We will miss you so very much! P.S. CANCER SUCKS! She was preceded in death by her husband Ted Smith, her parents Guy and Frances Everett, her brother Robert Everett, her daughter Marsha Smith Holmes, her son Geoff Smith, her son Ned Smith and her great-grandson Justin Lockwood. At Fran's request, there will be no formal services. Cremation has taken place. In lieu of flowers, if you wish, please donate to one of the following, The American Cancer Society or The Names Project Foundation-101 Krof St, Atlanta, Georgia 30307. DO NOT STAND AT MY GRAVE AND WEEP Do not stand at my grave and weep. I am not there, I do not sleep. I am a thousand winds that blow. I am the softly falling snow. I am the sunlight on ripened grain. I am the gentle autumn rain. I am in the morning hush. I am in the graceful rush. of beautiful birds in circling flight. I am the starshine of the night. I am in the flowers that bloom. I am in a quiet room. I am in the birds that sing. I am in each lovely thing. Do not stand at my grave and cry. I am not there, I did not die. Please sign the online guestbook or leave a note for the family at www.kayserschapel.com. Arrangements are in the care of Kayser's Chapel & Crematory, Moses Lake, WA 98837.

Frances (Fanny) A. Smith Frances Alayne Everett Smith, 92, of Moses Lake, Washington passed away on March 6th, 2022, in her home at the Avamere assisted living facility, after losing her battle with cancer. Her son Paul and daughter-in-law Chantel... View Obituary & Service Information

The family of Frances "Fanny" Alayne Smith created this Life Tributes page to make it easy to share your memories.