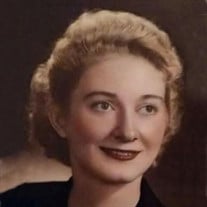 Frances Adelaide (Grahlfs) Kelley, 93, of Marlin, WA passed away Sunday, February 25, 2018, at Brookdale Senior Living in Moses Lake, WA. She was born January 22, 1925 in Naches, WA to Carlos von Hagen Grahlfs and Rose Katherine (Meystre) Grahlfs. Frances attended school in Naches and maintained straight A’s all through school while working in the orchards and packing sheds. She graduated as valedictorian in 1942 after having been skipped a grade. After High School, she attended Washington State College, The University of Utah, and graduated from Swedish Hospital School of Nursing in Seattle as an R.N. She met Dwight Kelley while working at Swedish Hospital. They were married Dec 31, 1947 and moved to Pullman where Dwight finished his education at WSU while Frances worked at the Hospital in Pullman. In 1951, they moved to Nespelem, WA where Dwight was hired as the High School science teacher and Frances worked at the Colville Indian Agency Hospital in Nespelem and served as the Nespelem school nurse. When the High School in Nespelem was closed, they moved their family, pets, and horses to Bickleton, WA and then to Trout Lake, WA where Dwight served as superintendent and Frances worked at the White Salmon hospital, drove school bus, and took care of her daughters and a number of other people who needed a temporary home. In 1968, they were able to take their family to Syracuse, NY for the 68/69 school year. While Dwight studied at the university, Frances worked at the V.A. Hospital and Upstate New York Medical Center. That year, she was able to visit with her many New York relatives and tour the areas her father was from. It was a highlight of her life. After moving back to Washington, they relocated to the Wilson Creek area where Dwight served as superintendent of schools and Frances worked for Dr. Roth and Dr. Larson at their eye, ear, nose and throat clinic in Moses Lake. They retired in 1976 and moved back to Trout Lake where they enjoyed huckleberry picking, hikes in the woods, canning and drying large amounts of home-grown fruit, and caring for their many pets. In 2000, an unfortunate house fire and Dwight’s increasing struggles with Alzheimers caused them to move to Marlin, WA to be closer to family. Frances is survived by daughters Candice (Sam) Compogno of Spokane and Katherine (Tracy) Lesser of Marlin; Brother-in-law Richard Kelley of Missoula,MT; grandchildren Nathan Clark, Carmine Williams, Kelley Compogno, Nicki Spees, Katie Harmon and Eric, Kyle and Stacia Lesser; and eight great-grand children. She was preceded in death by her husband Dwight Kelley, her parents, daughter Jeanna Claibourn, and brother Emile Grahlfs. There will be no services at her request. If desired, memorials may be made to a local animal shelter.

The family of Frances Grahlfs Kelley created this Life Tributes page to make it easy to share your memories.