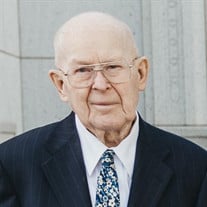 Forest Gale Lybbert Forest Lybbert, longtime Columbia Basin farmer, devoted family man, and dedicated member of the Church of Jesus Christ of Latter-day Saints died at home in Moses Lake on Tuesday, July 17, 2018. He was 93. Forest graduated from Uintah High School in Vernal, Utah in 1942 and then enlisted in the Navy. During the war, much of his immediate and extended family moved to Moses Lake, Washington. After the war, Forest followed, and there met and married Betty Graham at the Presbyterian Church in Moses Lake in 1947. They celebrated their 71st wedding anniversary in April. Supporting a young family, Forest farmed in Moses Lake with his father Jacob N. Lybbert. Though a member of The Church of Jesus Christ of Latter-day Saints his entire life, Forest was not yet fully converted to the gospel, but friendships and events prompted him to think more deeply about spiritual matters. Living next door to dear friends David and Marilyn Stevens, in Knolls Vista, was an important part of this conversion. The Stevens mentored and loved Forest and Betty. Forest’s early reluctance to commit to his faith softened when he was asked to teach a Sunday School class using the text The Message of the Master. Forest was intimidated by the weighty material and was certain that those 17- and 18-year-olds knew more about the life of Jesus Christ than he did. Forest’s turn to faith and his conversion to the gospel of Jesus Christ changed his life forever. In September of 1960, Forest, Betty, and their children were sealed together in the Cardston Alberta Canada temple for time and all eternity. Forest and Betty always planned to serve a mission together. Starting in December 1996, they served an 18-month mission in London, England. At the age of 40, Forest was recognized as the Outstanding Conservation Farmer of the Year. The Columbia Basin Daily Herald noted the award was based on “crop rotation, good irrigation and soil building practices, erosion and weed control, clean ditch banks and the plowing under of residue.” For many years Forest served on the board of directors of the Sugar Beet Growers Association and negotiated beet contracts as part of his responsibilities. Forest had a particular love for the Latino families that came to the basin working side by side to build a successful agricultural community. Lybbert’s Pond was Forest’s idea. He saw it as a recreation spot not only for his family but also for the community. On a hot summer day during the 70s, it was common to see cars parked around the pond and lined up toward Road O. The pond had a diving board, a raft, and later a rope swing that Forest installed when he was in his 70s. As a teenager Forest drove truck hauling alfalfa meal from Vernal to Salt Lake City. On his return trips he hauled various provisions, sometimes those provisions were for Uncle Karl’s (Goodrich) general store in Naples (near Vernal). Forest always stopped at Snelgrove Ice Cream on 21st South and bought a quart of ice cream, placed it between his legs, and ate it as he drove up Parley’s Canyon on his way back to Vernal. His early love of ice cream became a family tradition enjoyed by his children, grandchildren and great-grandchildren. Forest loved adventuring with his family and others. Notable was his love of snow skiing and waterskiing. In 1971, he bought the ‘green boat’ and taught his family and many others to waterski. He believed girls should learn to waterski because it put them on equal footing with the boys. His favorite ski hill was Sugarloaf at Alta, Utah. Forest skied just as he lived life: straight down the hill with no looking back. Forest Gale Lybbert was born in Vernal, Utah on December 2, 1924. He was the youngest child of Jacob Norman Lybbert and Elma Goodrich. Forest’s mother Elma died before Forest was two years old. Later Jacob married Orva Eaton. Forest had one older brother and three older sisters, and one younger brother and two younger sisters. Forest and Betty also had a son, Derek, who died at birth in 1953. Forest passed away on July 17th, 2018. He is survived by his wife Betty; his brother Kay Lybbert of Suquamish Washington; children, Thomasene Lybbert of Moses Lake, Shannon and Bill Low of Denver Colorado, Shelly Hutchinson of Moses Lake, Dale and LeeAnn Lybbert of Moses Lake, Scott and Teri Lybbert of Kennewick, Tracy and Jill Lybbert of Pasco, Mark and Marion Lybbert of University Place, Washington, and Rodger and Kay Graham of Provo, Utah. Forest and Betty have 28 grandchildren and 59 great-grandchildren. Funeral services will be held at The Church of Jesus Christ of Latter-day Saints at 1515 S Division at 10:00 AM, Monday, July 23. There will be a viewing at Kayser’s Chapel 5:30 to 7:00 PM on Sunday July 22 and 9:00 to 9:30 AM July 23, before the funeral service, at the church. Share a memory at www.kayserschapel.com

The family of Forest Lybbert created this Life Tributes page to make it easy to share your memories.