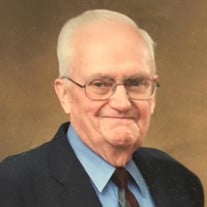 Floyd Hansen Jr., 92, a longtime resident of Ephrata and former Chief of Police, passed away peacefully at the Coolidge House Adult Family Care Home, August 18,2018.He was born January 8, 1926 in Wilbur, Washington to Floyd Hansen Sr., and Nialeen Hampton Hansen. Floyd lived in Grand Coulee, Spokane and Pullman during his early years where the family relocated for his father’s job with the State Patrol. He spent his summers hiking and horseback riding at Streamboat Rock where his grandparents homesteaded in the early 1900’s. He attended schools in Spokane and Pullman. During his high school years, he ran on the Pullman High school track team, winning a state medal in the mile run. He graduated from North CentralHigh School in 1947 following his discharge from the U.S. Navy. He enlisted in the U.S. Navy in 1943 at 17 years of age attending the Farragut Navel Training Station. He went on to serve on the USS Augusta, USS Portland, and at PSC USNB Bremerton, Washington. His service on the warship USS Augusta (Navy flagship) included patrolling the English Channel on the shores of Normandy, France during the D-Day invasion for 26 days. He received the American Area Campaign Medal, European-African Middle Eastern Area Campaign Medal – 2 stars, and the World War II Victory Medal with an Honorable Discharge in 1946. Floyd married Leora Johnson of Omak, Washington, December 29, 1947. Floyd was employed by the Burlington Northern Railroad as a ticket agent and telegraph operator in Omak and transferred to an opening at the Ephrata Depot. Four years after their move to Ephrata, Floyd was offered employment with the Ephrata Police Department following in his father’s footsteps of a career in law enforcement. During his career, he served as a patrolman, Sergeant, Lieutenant and Chief of Police. He graduated from the FBI Academy in 1974. Floyd retired in 1979 after a 33 year career with the Ephrata Police Department. Not only did Floyd have a career in law enforcement, but he always had a second part-time job working for the U.S. Postal Service and many of the local Ephrata businesses as a car salesman, shoe repairman, milk deliveryman, and assisted with funeral home services. After his retirement from the police department, he went to work the following day for House Laundry as a driver for approximately 10 years. In 1988, he began work as a bailiff for Grant County Superior Court, retiring in 2004. He served on the Civil Service Commission for the City of Ephrata for many years. Floyd was a member of the American Legion and the Grant County Historic Society at the time of his passing. Over the years, he provided service in the Kiwanis Club, Elks Lodge, and was a member of the Methodist Church and the Ephrata Masonic Lodge. Floyd is survived by his wife of 70 years, Leora Hansen of Ephrata; a daughter Sheryl and husband Curt Dotson of Soap Lake; a son Gregory Hansen of Moses Lake; three grandchildren Justin (Elisabeth) Grubb; Jared (Emilie) Grubb, and Elijah Dotson all residing in Ephrata; greatgrandchildren, Zoie and Richard Grubb; and sister Patricia Witham of Ephrata and several nephews and nieces. He was preceded in death by his father, Floyd Hansen Sr., mother Nialeen Slater; step-father Glen Slater, step-mothers Esther Hansen and Ruth Hansen, brother-in-law William Witham, daughter-in-law Lori Hansen and beloved great granddaughter Audrey Grubb. There will be a memorial service at the American Legion Club in Ephrata at 11:00 am on Saturday, September 15, 2018 and interment with military honors at Valley View Memorial Park in Soap Lake. A luncheon will follow at the American Legion.The family requests memorials be made to Grant County Historical Society or the American Legion Color Guard in lieu of flowers. A special thank you to the owners and the caregivers at Coolidge House Adult Family Care for their kind and wonderful care he received during his stay.

The family of Floyd Hansen created this Life Tributes page to make it easy to share your memories.

Floyd Hansen Jr., 92, a longtime resident of Ephrata and former...