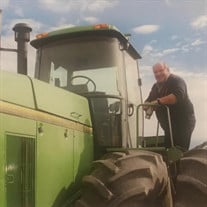 On April 13, 2020, Finn Christian Clausen, Warden, passed peacefully away in his sleep at Columbia Crest Care Center in Moses Lake. Finn was born November 18, 1943, in Haderslev, Denmark. He was the only child of Jes and Helene Clausen. His parents passed away when he was 16 years old. He was then taken in by the Nielsen Family who became like family to him, treating him as their own. As a teenager he worked on local farms where his passion for agriculture was born. In 1965, After serving in the Danish Army on the Gaza Strip for a year, he immigrated to Woodland, California. He was 22 years old. It was here while, he worked on a farm for two years, that he met Anna Marie Hogh, also from Denmark. In 1968 they moved to Prosser, Washington, where he worked on a dry land wheat farm. Finn and Anna Marie were married that December, in Prosser. In 1971 they ended up in Warden, Washington, where Finn managed Columbia Producers’ farm for 10 years. In 1981, Finn and Anna Marie bought 150 acres and a tractor and started farming on their own. Through hard work and perseverance, together, they lived the American Dream. They had 3 children together, Shanna, Shawn and Boe, whom, with their families work and manage Stokrose Farms. Finn and Anna Marie divorced in 1998, but remained friends for the rest of his life. Finn was diagnosed with cancer in 2009 which resulted in retirement from farming. He loved taking drives and seeing the variety of agriculture our country had to offer. He was well traveled and had visited much of the world with friends. Other than farming Finn had a passion for developing land, digging ponds and moving dirt with his favorite John Deere tractor and blade. Finn is survived by Anna Marie, children, Shanna (Aaron), Shawn (Jeanne), Boe (Shannon), 12 grandchildren; Kayla, Averie, Keeley, Reagan, Hunter, Soren, Svend, Kenzley, Annelise, Axel, Case, Everley and a close circle of friends who are considered family. There will be no service but the family is planning a celebration of his life this summer.

On April 13, 2020, Finn Christian Clausen, Warden, passed peacefully away in his sleep at Columbia Crest Care Center in Moses Lake. Finn was born November 18, 1943, in Haderslev, Denmark. He was the only child of Jes and Helene Clausen. His... View Obituary & Service Information

The family of Finn Christian Clausen created this Life Tributes page to make it easy to share your memories.