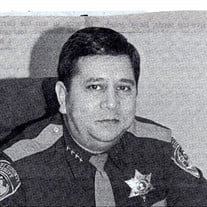 Felix Ramon passed away at his home in Moses Lake with family members present on May 16, 2021. He was born in El Dorado, TX to parents Belen and Fernando Ramon Sr. on September 13, 1937. The family moved to Washington in 1949 and settled in Grandview where they started a farm. They grew an assortment of vegetables but the main crop was asparagus. Felix learned his work ethic and devotion to family growing up on the family farm. He left school at age 8 to help his parents on the farm when they were ill. Felix worked hard but also developed a love of reading and always had time for adventures with his siblings. Grand stories of adventures that were shared with the grandkids, grand-nieces and grand-nephews which prompted an occasional call to Uncle Felix to confirm if it really happened that way. In 1960, Felix was drafted into the Army and served his county with pride. This prompted his long and distinguished career in law enforcement. He was honorably discharged in 1963 with Sharpshooter (M14) and Marksman (Pistol .45) medals and continued his service in the Army Reserves, retiring in 1997. After discharge from active service, he returned to the Yakima Valley and obtained employment with the Toppenish Police Department. While working in Toppenish he became friends with fellow officer Richard Egeland. Richard would eventually introduce Felix to his niece Minnie Bridges. They fell in love and Felix and Minnie would then marry March 12, 1966. Their first daughter Melissa was born in 1967 while they resided in Toppenish. Felix wanted to advance his career in law enforcement and started employment with the Grant County Sheriff’s Office and moved to Moses Lake in May of 1968. Their second daughter Patricia was born later that year. While working full time and supporting his family, Felix took his love of reading and applied it to the pursuit of his education. He attended Big Bend Community College and obtained his Associate in Arts Degree in 1970 and continued on to Eastern Washington University where he graduated with his Bachelor of Arts degree in June of 1979. Felix then ran for Sheriff of Grant County, he was elected and started serving in 1982. After being re-elected in 1986, he served through 1990. Felix wasn’t quite ready to fully retire so he went to work with the Washington State Department of Corrections. In 1996, he retired from law enforcement and start his next career as a full-time grandpa. He loved that career the most. Minnie and Felix enjoyed traveling and spending time with friends and family. Felix always loved a good book and you would often find him with book in hand when he had free time. Felix and Minnie also became active with the American Legion in Moses Lake. He was an advocate for all to pursue their education and served on the Board of Trustees for Big Bend Community College from 1994-2010. Felix is preceded in death by his parents and oldest brother, Fernando Jr. He is survived by his loving wife of 55 years Minnie, daughters Melissa (Robert) Lightel and Patricia (Mike) Gambrell, grandsons Jacob (Crystal) Lightel, Derek (Kayla Vandermark) Lightel, Travis (Shelby) Palmer, Quenton (Jocelyne) Palmer and his favorite granddaughter Courtney Lightel, great grandsons Elias Palmer and Lucas Lightel; brothers Oscar and Ruben, sisters Maria, Amelia, Rosa and Cecilia and numerous nieces, nephews, great-nieces, and great-nephews. Felix's wife has setup a Criminal Justice Scholarship in his name. In lieu of flowers the family ask that donations be made to the Big Bend Community College Foundation, 7662 Chanute Street NE, Moses Lake. A private family graveside will be held at Washington State Veterans Cemetery in Medical Lake on Monday, May 24, 2020. There will be a celebration of life at the Elks Club in Moses Lake on Monday, May 24, 2021 from 3-6 p.m.

Felix Ramon passed away at his home in Moses Lake with family members present on May 16, 2021. He was born in El Dorado, TX to parents Belen and Fernando Ramon Sr. on September 13, 1937. The family moved to Washington in 1949 and settled... View Obituary & Service Information

The family of Felix Ramon created this Life Tributes page to make it easy to share your memories.

Felix Ramon passed away at his home in Moses Lake with family...