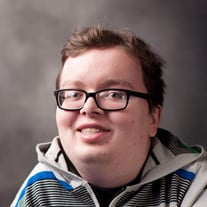 A Glimpse at Fedor Gaponenko Fedor Gaponenko passed away at the young age of 25 on Saturday, February 3nd,2018. He left peacefully in his sleep after a long battle with Muscular Dystrophy. Now he is with the Lord in a perfectly able body. Fedor was born in Melitopol, Ukraine on April 14, 1992, to Andrey and Mariya Gaponenko. From the moment it became evident that he will require a little more care, Fedor’s parents poured their lives into him. He was an exceptionally bright child and continued to accomplish many of his dreams. His school years took place in his hometown Moses Lake once his family immigrated to the United States of America. He excelled and graduated from Moses Lake High School and Big Bend Community College alongside many of his long-time friends and with the care of his self-proclaimed “second mom” care provider and dear friend Bea Stephenson. He went on to study journalism and design and graduated with the Bachelor’s degree from Eastern Washington University in 2013. There he spent much of his time interviewing athletes and coaches while writing for the Easterner, the university newspaper. When back at home he worked at the high school tutoring students in math. On top of his academic achievements, Fedor had many artistic interests. He played the clarinet with his middle school band. Eventually taught himself the electric guitar despite the physical limitations and was awarded a garage-band set up by the Make-a-Wish Foundation. Fedor was an avid reader, a dabbling sketch artist, and tried his hand at creative writing. Some of his last projects include learning the Japanese language and starting a personal blog. As much as he enjoyed the above things, Fedor’s true passion was Jesus and people. Everyone who crossed paths with Fedor usually came back for more. For someone who was wheelchair bound he was quite adventurous with always a friend or ten by his side. Whether it was book club discussing C.S. Lewis or church camp bond-fire worship, Fedor was game. His stubborn side convinced his Grace Harvest Church family to dip him into the Moses Lake waters for his baptism and pray fervently on the shores of Montlake Park. Fedor’s home was always open to his friends no matter the need – some came for a game of Catan or to catch the sports on TV, others sought out a listening ear or picked up a theological discussion and then debated conspiracy theories, and still, others were comfortable enough to nap on the couch. Fedor enjoyed sports and was a huge Seahawks fan and 2018 Superbowl was the first time his hang out room was empty. Fedor prayed for healing and aspired to do great things with his life, but little did he know his daily living impacted many forever. Fedor was succeeded by his father, Andrey; mother, Mariya; sister, Yelena; brother-in-law, Stan; niece and nephew, Ariana and Aurelius. Funeral Service will be held Saturday, February 10, 2018 at 10:00 am Source of Life Church- 1001 W. Valley Drive, Moses Lake, WA 98837 Burial will follow Guarding Angels Cemetery - 2595 Road L N.E., Moses Lake, WA 98837

A Glimpse at Fedor Gaponenko Fedor Gaponenko passed away at the young age of 25 on Saturday, February 3nd,2018. He left peacefully in his sleep after a long battle with Muscular Dystrophy. Now he is with the Lord in a perfectly able body. Fedor... View Obituary & Service Information

The family of Fedor A Gaponenko created this Life Tributes page to make it easy to share your memories.