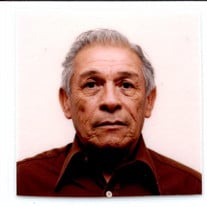 Fausto B. Cruz, 98, of Moses Lake, Washington, passed away on Saturday, June 20, 2020, at Samaritan Hospital in Moses Lake. Fausto was born in Taylor Springs, Illinois, the oldest of five children. His daughter, a sister, and two brothers precede him in death and everlasting memory. He is survived by his brother, Rudy, his beloved wife, Esther, their four sons, 17 grandchildren, 24 great grandchildren, and 3 great-great grandchildren. Fausto lived in the Moses Lake area for about 63 years. He served in the United States Navy from August 1942 to December 1945, ultimately leading a 4-person gun crew aboard the USS Colorado in the WWII Pacific Theater. In January 1945, the ship was heavily damaged and Fausto was wounded, earning him the Purple Heart. He returned to the ship after medical care and sailed in Tokyo Bay during the ceremonial end of the war. He talked about his time in service with pride, recalling the impressiveness of the fleet, the bonds with fellow sailors, and the frenzy of battle. After receiving an honorable discharge, Fausto returned to Yakima Valley where he married Esther Cerna in 1946. He farmed for a number of families there, and then moved to Moses Lake around 1957, eventually taking over ownership of a farm in the early 70s. Fausto worked hard his entire life, ultimately matched every step of the way by his wife. In addition to many hundreds of acres of wheat, corn, alfalfa, or potatoes, they raised a large backyard garden together, took produce to the farmer’s market, reared animals, and taught their family that a good life is filled with hard work and love. Fausto and Esther loved each other deeply and they poured their hearts and souls into farm and family. Other family and friends were welcome to visit anytime and dinner for 20+ was normal for a Sunday afternoon. Upon retirement, they remained in their family home outside of Moses Lake and had been married 74 years at the time of Fausto’s death. With all that hard work, Fausto made time to enjoy the fruits of his labors. He loved watching sports and avidly attended high school and occasionally college games, meets, and matches, treating the printed schedules as a personal mission; he prioritized local and state championships over all else. He was very proud of his children’s and grandchildren’s many trophies and titles. He loved to hunt and fish, the time outdoors being worth the effort even if the catch was slim. Fishing and hunting trips were more than opportunities to fill the larder, but times to bond with his children, grandchildren, nieces, nephews, and friends. He often offered to take new hunters or fishers with him on their first outing, passing along his own brand of personal wisdom. Fausto will be deeply missed by many. Under the circumstances, funeral invitations will be limited to a handful of immediate family members.

Fausto B. Cruz, 98, of Moses Lake, Washington, passed away on Saturday, June 20, 2020, at Samaritan Hospital in Moses Lake. Fausto was born in Taylor Springs, Illinois, the oldest of five children. His daughter, a sister, and two brothers precede... View Obituary & Service Information

The family of Fausto B Cruz created this Life Tributes page to make it easy to share your memories.