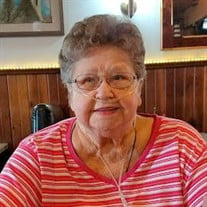 Evelyn “Ma” M. Brown East Wenatchee, WA (formerly of Moses Lake, WA) July 18, 1932 – November 27, 2018 Evelyn M. Brown, 86, passed away peacefully in East Wenatchee, WA on Tuesday, November 27, 2018. Evelyn had been residing at her daughter’s home in East Wenatchee for the last year. Evelyn was born on July 18, 1932 in Larimore, ND. She attend Larimore Public Schools and later when a young teenager moved to Coulee City, WA with her mother, sister and step-father where she graduated in1950. She met and married her husband, Eddie Brown from Hartline, WA on August 31, 1951 and moved to Moses Lake, WA. Evelyn retired from the Moses Lake Police Department in 1992. During her career at the police department she was very involved with the Salvation Army directing the annual bell-ringing fundraiser and helping out people in need in the community. She continued her charity activities while working for many years as she liked “to help people”. Evelyn was a fantastic cook, canned great pickles, crafted for many years and collected thimbles from around the world. Evelyn was very sharp witted and not afraid to speak her mind and not easily intimidated by anyone. She loved all types of music, dancing, watching football, playing cards and most of all, spending time with her family. She was a great mother and loving grandmother and will be greatly missed by all who knew her. A Celebration of Life will be held on Saturday, January 5, 2019 at 11:00 a.m. at the Immanuel Lutheran Church, 1020 South A, Moses Lake with Pastor Walter B. Klockers officiating. You may sign the guestbook or leave a note for the family at www.kayserschapel.com Memorial contributions may be made to the Hartline Cemetery District #3, c/o Sheila Poe, Route 2, Box 104, Hartline, WA 99135 or to Central Washington Hospital Home Care & Hospice, 1020 N. Wenatchee Ave, Wenatchee, WA 98801. Evelyn is survived by her daughter and son-in-law, Marge and John Moeller, grandson Andrew and Dawn Rice, two great grandchildren, Abigail and Jay Rice, granddaughter, Jolie Hauff (Tim), all of East Wenatchee; granddaughter Amber Rice Mezo (Zaddian) great granddaughter, Evey, of Bellingham, WA; sisters Lois Pladson of Grand Forks, ND and Vonnie Kelley of Hartline, WA. She was preceded in death by her father, Raymond Wegge, her mother, Mabel, step-dad, Sanford Bakken, her son, Scott Brown, her husband, Edward Brown and her sister, Dolores Holwell.

The family of Eveyln "Ma" Brown created this Life Tributes page to make it easy to share your memories.