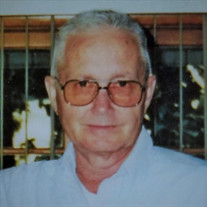 Everett Lee Crow, 85 of Moses Lake, Washington passed away on March 13, 2019 after battling Alzheimer’s for many years. He was born in Rush Springs, Oklahoma, on December 4, 1933 to Robert Lee and Hazel Jewel Crow. Everett spent his early years growing up and working with his family in Oklahoma. As a teen he moved to California to be with family. In 1951 he travel to and then settled in Grant County. During this time he was a part of the Columbia Basin Reclamation Project working on the Frenchman Hills Tunnel. As that job drew to a close he began working for U and I Sugar where he remained over 25 years until the closing of the plant. In 1958 he met the love of his life Linda Louise Gillett, who was also originally from Oklahoma. They married on September 5, 1959 and built a life together for almost 60 years, raising three sons, Terry, Brent and Corey. Everett loved the outdoors. He would often spend time camping and hunting, but he especially loved fishing. He would often be found on the lake fishing pole in hand, with the goal of a fish fry at the end of the day. Everett was proceeded in death by his father, Robert, mother, Hazel, brother, Claude, and sister, Ola. He is survived by his wife, Linda, sons Terry (Jennifer), Brent (Rebecca), Corey (Laurie), four grandchildren Lara (Ben), Rachel, Mathew, and Ryan as well as brothers, Loyd (Venus), Clyde and sister Mildred. Services will be held at Kayser’s Chapel, Moses Lake, Washington, on Saturday, March 23, 2019, at 2:00pm, with internment to follow at Guarding Angels Cemetery. In lieu of flowers donations may be made to Alzheimer’s Foundation of America, or Alzheimer’s Association.

Everett Lee Crow, 85 of Moses Lake, Washington passed away on March 13, 2019 after battling Alzheimer&#8217;s for many years. He was born in Rush Springs, Oklahoma, on December 4, 1933 to Robert Lee and Hazel Jewel Crow. Everett spent his... View Obituary & Service Information

The family of Everett Lee Crow created this Life Tributes page to make it easy to share your memories.

Everett Lee Crow, 85 of Moses Lake, Washington passed away on...