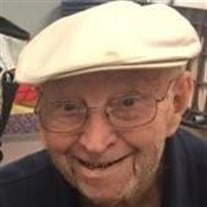 Eugene (Jim) C. Wilmot Jim passed away peacefully in his home July 23, 2019. Born November 2, 1921 in Snohomish, Washington to Ernest and Esther Wilmot. He graduated in 1939 in Anacortes, Washington. He served in the US Army between 1942-1946. While in the army he got married and they had a daughter. After they divorced, he met and married Mary Lou in 1947 and they had three children. He worked for the family dairy called Morning Sun Dairy until it closed. He then sold cars, insurance, and bottled milk for Arden. He then he started driving truck for Darigold and continued when it became Safeway until retirement. He and Mary Lou enjoyed traveling, square dancing, fishing, and camping with family. He played cards and board games with his wife almost every day. He was a member of the Lions Club and he played the drums in a band. He was a big supporter of youth athletics. He was preceded in death by his parents, his only brother Orville and his two sisters Maida Martin and Joyce Richburg. He is survived by his children Dee Kamp (Bill), Lynn McRae, Kent Wilmot (Jackie), and Shelley Wilmot, three granddaughters Tracie Egeland (Mike), Monica Saggau, Jaime Janke (Matt), two grandsons Lance Bingham (Kelly) and Kyle Wilmot (Sarah), and seven great grandsons Hayden Egeland (Christina), Connor Saggau (Jessica), Evan Saggau, Ryland Saggau, Jarin Saggau, Ryder Janke, and Klayton Wilmot and one great- great granddaughter Sophia Egeland. We want to thank Monroe House and Hospice staff for their care and support for Jim and his family. He loved his family and he will be missed. His wishes are not to have a service.

Eugene (Jim) C. Wilmot Jim passed away peacefully in his home July 23, 2019. Born November 2, 1921 in Snohomish, Washington to Ernest and Esther Wilmot. He graduated in 1939 in Anacortes, Washington. He served in the US Army between 1942-1946.... View Obituary & Service Information

The family of Eugene "Jim" Wilmot created this Life Tributes page to make it easy to share your memories.