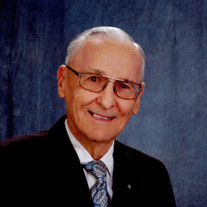 Eugene William Harwood, 102, passed away peacefully Saturday, Aug. 22, 2020, in Moses Lake, Wash. At his request, there will be only a private graveside service for the family. Gene was born at home on Sept. 27, 1917 in St. John, Wash.to Lester and Grace (Stoneman) Harwood. He was raised on the family’s dryland wheat farm with his sister and three brothers. He went on to attend WSC and Oregon State where he graduated in 1940 with a degree in Agriculture. In 1940, he married Alice Jane Sprague in Spokane, Wash. They moved back to the family farm in St. John and started the Harwood Feed Company with his father. With the promise of irrigation water in the Columbia Basin, the young couple recognized an opportunity and moved to Moses Lake in 1949 where they farmed until retiring in 1982. Gene and Alice built a home in town in 1993 and lived there together until her passing in 2013. Gene was a lifetime member of the Masonic Lodge #174, the O’Sullivan Grange, and the 4x8 Square Dance Club. He and Alice enjoyed traveling in their motorhome for 25 years and visited all 50 States. He also had a strong interest in the Grant County Fair. Gene was proud to be a grandson of pioneers who travelled West on the Oregon Trail. His grandparents settled on the Peone Prairie near Spokane. Gene began his farming career using horse-drawn implements on the hillsides of the Palouse; he saw the advent of indoor plumbing; telephones, televisions, computers, and more. He was really looking forward to owning a driverless car. When asked how to live a long and active life, he replied eating right, exercise, work hard, and be honest. Gene is survived by his two daughters, Janice (Rick) Timm of Okanogan and Debbie (Al) Robel of Moses Lake; his grandchildren, Amanda (Cutter Rains) Timm, Matt (Jill) Timm, Pam (Jim) Lewison, and Annie (Nathan) LaFrance); his great-grandchildren Tyler, Charlie, Turner, Tenley, Hunter, Gunner, Owen and Madelyn. He is also survived by his siblings Jack Harwood and Arlene Wagner. Gene’s family would like to thank the Moses Lake Senior Center for their friendship, and most especially the great people at Assured Hospice. Donations may be made to the Moses Lake Senior Center or to the Grant County Fairgrounds in his honor.

Eugene William Harwood, 102, passed away peacefully Saturday, Aug. 22, 2020, in Moses Lake, Wash. At his request, there will be only a private graveside service for the family. Gene was born at home on Sept. 27, 1917 in St. John, Wash.to Lester... View Obituary & Service Information

The family of Eugene William Harwood created this Life Tributes page to make it easy to share your memories.