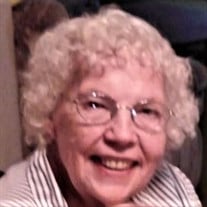 12/3/1935 – 7/15/2017 Our beloved Mother and Grandmother Erma Cox, 81 of Moses Lake WA, passed away peacefully July 15th, 2017 surrounded by her family. She was born December 3rd, 1935 in Neligh Nebraska to Lyle Milliken & Augusta (Radebaugh) Milliken. She was one of 14 children. Her family moved to Oakdale Nebraska when she was five and lived there until she was 18. She then moved to Washington State where she spent the rest of her life. Erma was married twice, first to Dock R. Morris in 1957, together they had six children. After Dock’s passing she was remarried to Marvin Cox in 1979and they had a son together. She took pride in being a homemaker, wife, mother and grandmother. She collected porcelain dolls and surrounded herself with what she referred to as “her babies”. She liked reading, sewing, and doing crafts. She was a member of the Peninsula Community Church and was dearly loved by so many fellow members. She leaves behind six children, Lyle Morris, June Rhyne, Julie Zyph (Eric), Julia Zundel (Russ), Jody Morris (Janet), and Daniel Cox (Samantha). Sixteen grandchildren Gilbert Jr. Salas (Kelly), Jeremy Salas, Michael Salas, (Alicia Klingemann (Aaron), Winter Jenkins (Aaron), Tavien Rhyne, Irecia Kiske (Shawn), Dustin Zyph (Kat), Ciera Zyph, Tabitha Zundel, Camille Zundel, Evan Zundel, Kyle Peters, Travis Morris, Jessica Morris, Lane Cox and ten great grandchildren, Kelsie Klingemann, Michael Jr. Salas, Nicholas Salas, Thomas Salas, Guy Gariano, Dillon Gariano, Auston Jenkins, Ashton Jenkins, Aidon Jenkins, Sydney Jenkins, Emma Kiske, Henry Kiske, Christian Fisher, Bethany Fisher, Copeland Zyph, & Lillian Zyph. She proceeded in death by her husband Dock R. Morris, her husband Marvin Cox, her Daughter Judy Salas, her parents and several other siblings. The family would like to extend their heartfelt thanks to the amazing people who cared for her from Moses Lake Assured Hospice, her friends that never left her side from Peninsula Community Church and all those who kept us all in prayer through these last few years. In lieu of flowers we ask that donations to be made to the American Cancer Society or the Scleroderma Foundation. She fought so hard not to leave us and gave so much to give us a good life. In our hearts we know she will always be with us and will be dearly missed. A celebration of her life will be held on September 9th, 2017 at 11am at the Peninsula Community Church, 2403 West Texas St., Moses Lake.

The family of Erma Cox created this Life Tributes page to make it easy to share your memories.