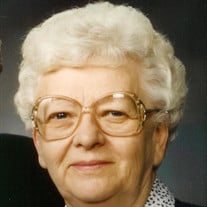 Erma Louise Wirt Christensen, of Royal City, WA, passed away July 30, 2020, at the home of her son, Gary Christensen. Erma Louise Wirt was born in 1928, the daughter of Julius and Mildred Wirt in Iowa. She was welcomed by her older brother, Don Wirt, and later helped welcome her younger brother, Bob Wirt. She spent most of her early years in Mediapolis, Iowa, with a few years in Oakville, Iowa. In high school, they moved to Kittitas, Washington, where she met Jay L. Christensen. The Wirt family moved back to Mediapolis but Erma and Jay kept in touch while he served in the Marines. Washington called the Wirt family back again; and Jay and Erma were married in 1947. They lived in Kittitas until 1957 when they moved to the Royal Slope. They were pioneers. Their farm ground started as sage brush. It was hard work but an opportunity for growth. Jay worked with his brothers, Dee, Ted and Bob Christensen. While in Kittitas, their family grew. Four children were born while they lived in Kittitas; first, a son, Gerald, (Gary); then a daughter, Wendy; another daughter, Debra, and another son, Eric. After moving to Royal, they had Lori and later, Daren joined the family. Erma loved that they were surrounded by family, Jay’s brothers, and mother. Erma and Lucy had a special relationship. It was hard for her to leave her parents and brothers in Kittitas, but she kept weekly visits to Kittitas as a priority. Family was supreme in Erma’s life. She was never happier than when the family was together—the more the merrier. She will be remembered for lemon drops, gummy bears, chocolate chip cookies, and popcorn. Erma loved to sew, read, and do various types of handwork. Erma was a member of the Church of Jesus Christ of Latter-day Saints. She served in many capacities. Jay and Erma served as the President and Companion of the San Diego Mission from 1990-1993. They also served as President and Matron of the Boise, Idaho Temple from 1993-1996. Both of her parents, older brother and husband preceded her in death. She is survived by her six children, Gary and Aurilla Christensen of Royal City, WA; Wendy and Pat Halpin of Olympia, WA; Debra and Paul Bergeson of Royal City, WA; Eric and Joni Christensen of St. George, Utah; Lori and Dee Winder of Lehi, Utah;, and Daren and Nancy Christensen of Royal City, WA; 32 grandchildren, 91 great-grandchildren with four more on the way, and 7 great-great-grandchildren. Her brother, Bob and Geri Wirt reside in Monroe, WA. She is beloved by numerous nieces and nephews. Funeral services will be held in Royal Camp and is by invitation only.

Erma Louise Wirt Christensen, of Royal City, WA, passed away July 30, 2020, at the home of her son, Gary Christensen. Erma Louise Wirt was born in 1928, the daughter of Julius and Mildred Wirt in Iowa. She was welcomed by her older brother,... View Obituary & Service Information

The family of Erma Louise Christensen created this Life Tributes page to make it easy to share your memories.