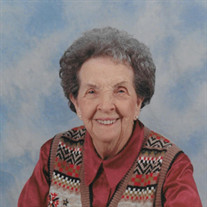 Enid Artina Clay passed away of natural causes at 12:25 p.m. on April 7, 2018 surrounded by family and friends. She was born on the family homestead in Goble, Oregon on June 12, 1924. She was the fifth of nine children born to Golda and Ray Grimshaw. She was born just before the beginning of The Great Depression and grew up experiencing the sting of being poor. Yet, she didn’t complain about being poor, but, instead, talked with pride about the closeness of being a member of a loving family, including an extended family of many aunts, uncles and cousins living within a few miles of the homestead. Enid attended grade school in Goble and high school in Rainier, Oregon, graduating in 1942. She married Willis C. “Bill” Wollard in Portland, Oregon. The couple then moved to Moses Lake. Out of this union came son, Dennis, in 1947, born in Ephrata, and daughter, Denise, in 1951, born after a move back to Portland. The couple separated and Enid moved to Moses Lake. Enid met Max Clay and the couple married in 1953. Max adopted Dennis and Denise giving them the last name of Clay. She was an active member of the Moses Lake United Methodist Church for 57 years. She held several jobs and volunteer positions during her life. She was a volunteer for the Ground Observer Corps, a civilian arm of the U.S. Air Force. She would stand watch in a tower located near the corner of Fifth Avenue and Balsam Street. The federal government was worried about enemy aircraft attacking United States military installations by flying below our radar. Her job was to identify and report to Larson Air Force Base every airplane passing over her position. Enid worked at the election board supervising a polling place for 60 years, from 1952 until 2012, when Washington State began using mail-in ballots. Enid worked as a sales clerk at W.T. Grants, a department store, from the time they opened until they closed in the 1960s. Not one to sit around, she opened a daycare in her basement. She cared for lots of little ones and she loved them all. More than one child would cry when their parents came to pick them up, as they didn’t want to go home, but wanted to stay with Grandma Clay. She was a Cub Scout Den Mother and, also, she and another mother founded the first Girl Scout Troop in Moses Lake. Enid was an Avon representative for many years. She worked at the Moses Lake Food Bank for 25 years, through the Retired Senior Volunteer Program, an arm of AARP. She also volunteered at the Moses Lake Senior Center, which became her home away from home. She enjoyed visiting with her many friends and having lunch with them every day at the senior center. Enid was a sounding board for many of Dennis’ and Denise’s friends. One later said she provided motherly strength and guidance he wasn’t getting at home. She had a baby shower for one of Denise’s senior classmates, when the girl’s mother wouldn’t. Some of the classmates would call the house to talk to Enid for motherly advice. She never told Dennis or Denise about the conversations. Her husband, Max, would bring home stray dogs and cats. Enid would heal their wounds, feed them and try to find their owner. Denise found a young abused boy who was sleeping in McCosh Park. Enid cleaned him up and fed him. The boy stayed at the Clay household for a couple of days, until Max had a stern talk with his father. The next day Max took the boy home. He was never abused again. One day Max brought home two teenage runaways. Enid cleaned them up and fed them. When the police officer arrived, she made him wait in the living room for almost half an hour, until the teens had finished eating in the kitchen. The officer was provided a piece of pie as he waited. Enid is preceded in death by her husband, Max, in 1986. She is survived by son, Dennis (Garnet), Moses Lake; daughter, Denise, Richland; Granddaughter, Roxee (Scott), Kennewick; Great-grandchildren, Kizzy, Zander and Nia, Kennewick; live-in friend and caregiver Ruth “Nikki” Winckler; sister, Nadine Driggs, Moses Lake; brother, Vern Grimshaw, Hacienda Heights, California. A celebration of Enid’s life will be held at a later date.

Enid Artina Clay passed away of natural causes at 12:25 p.m. on April 7, 2018 surrounded by family and friends. She was born on the family homestead in Goble, Oregon on June 12, 1924. She was the fifth of nine children born to Golda and Ray... View Obituary & Service Information

The family of Enid A Clay created this Life Tributes page to make it easy to share your memories.