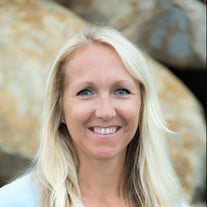 Emily Anderson Jensen passed away in her home June 26th. Emily battled cancer and fought courageously until the end. Emily was born March 14, 1981 in Delta, UT to Ardean and Janet Anderson. She was an active little girl always trying to keep up with her two older brothers and eventual four younger siblings. Emily loved to work and be outside. She was a great help on the farm with dad or in the house with mom. Wherever she was, she was helping and making things around her look and feel better. After graduating from Royal High School Emily graduated from Snow College in Ephraim, UT. She then attended Brigham Young University-Hawaii where she met her future husband, Jens Jensen. Emily and Jens were married March 2, 2002 in the Columbia River Temple. They lived several places in Washington until making Royal City their permanent home. Emily and Jens have five children: Blake (14), Trent (12), Bade (9), Tatum (7), and Bear (4). Emily is a member of The Church of Jesus Christ of Latter-Day Saints and she showed her children through example what it means to be a true disciple of Jesus Christ and to endure to the end. Emily had many hobbies that she loved to share with others. She was a quilter, a woodworker, a gardener, a runner, and an interior designer. But most of her time was spent being the best soccer mom out there. She has active kids and she loved being active with them and watching them do all of their activities, especially playing soccer, their family favorite. Emily will be sorely missed by her family and the Royal City community. She is survived by her loving husband and children, her parents, her siblings and their spouses: Jason and Emily Anderson, Nicolas and Brooke Anderson, Mark and Ashley Anderson, Sarah and Tyson Roylance, Janae and Kyle Merrill, and Alice and Bryant Andersen, and her many nieces, nephews, aunts, uncles, and cousins. Funeral services for Emily will be Saturday June 29th at 10 AM held at the Church of Jesus Christ of Latter-Day Saints in Royal City, WA. Emily will be buried at Royal Memorial Gardens in Royal City following the funeral.

Emily Anderson Jensen passed away in her home June 26th. Emily battled cancer and fought courageously until the end. Emily was born March 14, 1981 in Delta, UT to Ardean and Janet Anderson. She was an active little girl always trying to keep... View Obituary & Service Information

The family of Emily Jensen created this Life Tributes page to make it easy to share your memories.