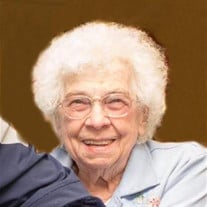 Elsie J. Schell, 86 went to be with the Lord on November 20, 2016, with many family members by her side. Elsie was born on December 25,1929 to Julius and Agnus VanSteelandt in Boulder, Colorado. Elsie married Donald Johnson in Longmont, Colorado on December 28,1947.Together they had 3 children. Gene, Ron and Karen. Donald passed away on June 5,1955. Elsie later married William Schell in Ratone, New Mexico on January 5, 1957. Together they had 2 children. Deanna and Gayle. Bill and Elsie raised their children on a farm in Longmont, Colorado until 1964 when they moved to Moses Lake, Washington to continue farming. Where Elsie worked at Skookum diner for a short time before going to work at the W.T. Grant store until they closed in 1976. She then went to work at Pay-n-Save until they closed in 1985. Elsie drove for People for People until she retired in 2008. Elsie attended the Church of Christ from 1964 until the time of her death, where she made many friends who loved her. She especially "loved" getting hugs from the little ones. Elsie enjoyed her many trips to the ocean going fishing with friends and family. Elsie and Bill traveled all over, going as far as Walt Disney World and took a cruise to the Bahamas. She also enjoyed watching the Mariners as well as the Seahawks. She loved to crochet and made baby blankets donating them to Crossroads Pregnancy Resource Center. Elsie loved spending time with her family, her grandchildren & great-grandchildren, taking them fishing & camping. Along with many family activities. There wasn't anything she wouldn't do for her family. Elsie is survived by her husband of 59 years William Schell, and their children Gene Johnson (Kathy) of Davenport, Washington, Ronald Johnson (Laura) of Overland Park, Missouri, Karen Short (Earl) of Moses Lake, Deanna Prentice of Moses Lake, Gayle Hopkins(Mark) of Moses Lake. One brother Ernie VanSteelandt (Carole) of Longmont, Colorado. Elsie had 15 grandchildren, 29 great grandchildren and 8 great-great grandchildren. Along with her parents Elsie was preceded in death by her first husband Donald Johnson and her son in law Russell Prentice. Memorial services will be at the Church of Christ at 808 E. Sharon in Moses Lake, Washington on December 9th at 11am. There will be a time for gathering afterwards. In lieu of flowers please make donations to the Church of Christ. Please sign the online guestbook or leave a note for the family at www.kayserschapel.com Arrangements are in care of Kayser's Chapel & Crematory.

Elsie J. Schell, 86 went to be with the Lord on November 20, 2016, with many family members by her side. Elsie was born on December 25,1929 to Julius and Agnus VanSteelandt in Boulder, Colorado. Elsie married Donald Johnson in Longmont, Colorado... View Obituary & Service Information

The family of Elsie Schell created this Life Tributes page to make it easy to share your memories.