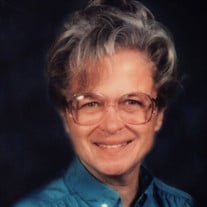 Betty Fuller, 83, passed away peacefully Feb. 22, 2019. Born Elizabeth Ruth Brown on July 10, 1935 in Fergus Falls, MN, the daughter of Perry and Viola Brown. Being raised on a farm and being one of ten children there was always work to do. Animals to care for, taking turns working the fields with a team of horses, cows to milk, never a dull moment. After graduating from Fergus High School she moved into town where she traded jeans for dresses. Betty went to work for the City of Fergus Falls doing secretarial work. Betty married and they moved out west where they settled in Ephrata, WA. She gained employment at the Bureau of Reclamation in the secretarial pool. Her daughter Laurie was born in 1957. She loved being a mom and family was very important to her. Her marriage ended but she worked very hard as a single mom to provide and care for her daughter. She also made sure that trips back to Minnesota happened so Laurie could be with family. Betty had many adventures and loved to travel. Visiting many places in the states and her favorite was going to Hawaii. While working at the Columbia Basin Job Corps, Betty met Vic Fuller. In October of 1974 they married, Vic and Betty bought a small farm outside of Moses Lake where they raised calves. She loved her 4 legged babies. It reminded her of her youth when she used to show dairy cattle in 4-H. Betty retired from the Government to stay at home to babysit grandkids. Any given day you could see her pulling a wagon with babies and calf bottles to the barn. As the grandkids got older, Betty thought she would like to work part time. She took a job working at Walmart in fabrics and crafts. She loved to sew, knit and crochet. We all have many of her creations. Betty then worked part time with Laurie at Dr. Finley J. Grants office. Being such a busy woman she never missed a ball game or sporting event that grandchildren were in. When Vic coached a fast pitch team, Betty was the team grandma. She was always there to give a hug to anyone who needed one. She was an amazing mother, grandmother and wife. She will be greatly missed. Preceding her in death were her parents, her older brother Milton and her sister Jean. Survivors include her husband Vic; daughter Laurie (Ron) Coombs; their children Brianne (Matt) Hickman (children Gavin and Jared), Sutton (Kristen) Coombs (son Dylan), Brody Coombs (daughter Ashlynn); stepdaughter Teressa Fuller, her children Gabrielle and Jonah, stepson Mark (Heidi) Fuller their children Kevin, Vivian and Malcom. Betty’s siblings, Lynn (Judy) Brown, Arlene (Otto) Hanson, Beatrice (Owen) Runningen, Diana Burmeister, Dennis Brown, James (Lisa) Brown, Barbara (Dave) Anderson all of Minnesota. A special thank you to Penny Weber and her staff for the excellent care Betty received while in their care. Services will be held Friday March 1, 2019 at 12 p.m. at Kayser’s Chapel of Memories, Moses Lake, followed by a graveside service at Guarding Angels Cemetery. Please express your thoughts and memories for the family at www.kayserschapel.com. Arrangements are under the care of Kayser’s Chapel of Memories.

Betty Fuller, 83, passed away peacefully Feb. 22, 2019. Born Elizabeth Ruth Brown on July 10, 1935 in Fergus Falls, MN, the daughter of Perry and Viola Brown. Being raised on a farm and being one of ten children there was always work to do.... View Obituary & Service Information

The family of Elizabeth Ruth Fuller created this Life Tributes page to make it easy to share your memories.