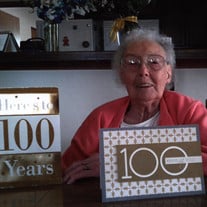 Eleanor (Rita) Conner Young November 9, 1918 ~ February 17, 2019 Rita Young passed away peacefully on February 17, 2019. She was born to loving parents Simon John Conner and Edith Mae Walker-Conner on November 9, 1918 at Turk Mine near Fruitland, Washington. She attended Fruitland grade school and lived with an aunt and uncle in Spokane to attend and graduated from Marycliff High School in 1937. She married John Peter Young at Gonzaga Chapel in Spokane on July 4, 1938. They moved from Fruitland to Spokane in 1942. A loving mother and housewife, they had one daughter, Eleanor Joan, in 1939. A dedicated homemaker, she volunteered at many different Community organizations. Such as: girl scout leader at Holmes Elementary; helped with Bloomsday and mailings for Catholic Charities and Civic Theater. She was a member of St. Aloysius Parish and Alter Society and the Bernadette Money Counters, and volunteered for 30 years with the Chauncery Sewing Ladies who make quilts to support Catholic Charities and donate them to St Vincent’s Ministry and Shriner’s Children’s Hospital. After her husbands death in 1962, Rita worked at Medical Services Corp as a claim supervisor until her retirement in 1984. A very independent, dependable and helpful person, she was a widow for 56 years and took care of her home and cabin at Davis Lake until they became too much for her. In 2015, at the age of 97, she moved to Moses Lake to be closer to her daughter Joan and son-in-law Don. With their help, she continued to live independently in her own home. Rita was faithful to Jesus Christ with her daily prayers, rosary and loved spending time with her family and friends, sewing quilts, tending her flower garden, baking cookies and muffins, working word search puzzles and reading. She was always willing to help other people, but never wanted to be a bother or accept help from anyone. She continued making her baby quilts even when she was 100 and was a real inspiration to everyone who knew and loved her. Many people asked her the secret to a long life and she would say “I don’t feel that old, but I keep active, and since my last name in Young, I will always be young”. Her favorite saying was: “Don’t put off until tomorrow, what you can do today”. She was preceded in death by husband, John, her parents, two brothers, John and Lawrence, many aunts and uncles; cousins Mary and Cathy and many Spokane friends. Rita is survived by her daughter Joan (Don) Adolfson; two grandchildren Eric (Kari) Adolfson; Cheryl (Mark) Clinton; and seven great grandchildren Caleb, Ethan, Emily and Sara Adolfson; Michael, Kendall and Kailee Clinton; as well as cousins Patti and Jean, other Spokane friends and her Our Lady of Fatima Church family. We would like to thank Dr. Ebaugh and the doctors and nursed at Samaritan Hospital for her care and Fr Dan Duffner for his special blessings in her final days. A rosay and Mass of Christian burial will be held Friday March 8, 2019, starting at 9:30 a.m. at Our Lady of Fatima Catholic Church, 200 N Dale Road, Moses Lake, Washington. Immediately following, a luncheon will be held at the Fatima Center. Burial will be at Holy Cross Cemetery Chapel, N 7200 Wall Street in Spokane on Saturday, March 9, 2019 at 11 a.m. In lieu of flowers, please make any donations, in her memory, to Our Lady of Fatima Center Remodel, Catholic Charities, or Spokane Shriner’s Hospital.

The family of Eleanor Rita Young created this Life Tributes page to make it easy to share your memories.